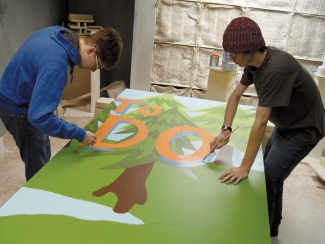 Local boy scout Ely Tilley (right) paints one panel of a “Welcome to Toledo” sign with the help of fellow scout Sam Tauscher (left) last week in preparation for installation of the sign on Saturday at the east entrance into town.

Toledo residents may notice a new fixture on the east end of town after Saturday’s Cleanup Day. Local boy scout Ely Tilley has endeavored to build and install a new welcome sign greeting travelers entering by way of the Toledo Bridge, and plans to complete his project this weekend.

A member of Boy Scout Troop 9352 and senior at Toledo High School, Tilley had chosen to build the sign for his Eagle Scout project and said the idea was not far from his regular creative endeavors.

“I like doing artistic things,” he stated, adding Mike Morgan, of the Morgan Arts Center, was the first to suggest building a sign for the city and Tilley said he “loved the idea.”

Reaching eight feet high and 12 feet wide, the finished sign will state, “Welcome to Toledo,” with mountains and forests in the background, all of which have been painted by the hands of Tilley and his fellow scouts with Tilley stating it is not unusual for an entire troop to pitch in on an Eagle Scout project.

“We’re all supportive of each other,” he said, stating his troop is also engaged in another Eagle Scout project for Tavish Zlotoff by replacing the sidewalk in front of the Toledo Presbyterian Church.

After graduating this year and, hopefully, being designated an Eagle Scout, Tilley said he plans to remain active with the program, which he first joined in third grade. He said his involvement will include serving as a staff member at Camp Hahobas, in the Belfair area, during summer months, in addition to local scout activities.

When reflecting on the challenges faced in his efforts to create the sign, he said he was not terribly surprised by the need to conform with state and local regulations regarding roadside construction and sign placement, stating scouts grow accustomed to such interactions with governing bodies as they endeavor to serve their communities.
Read more from:
TC - Community News
Tags:
None
Share: