Local pastor goes on mission trip; has experience of a lifetime 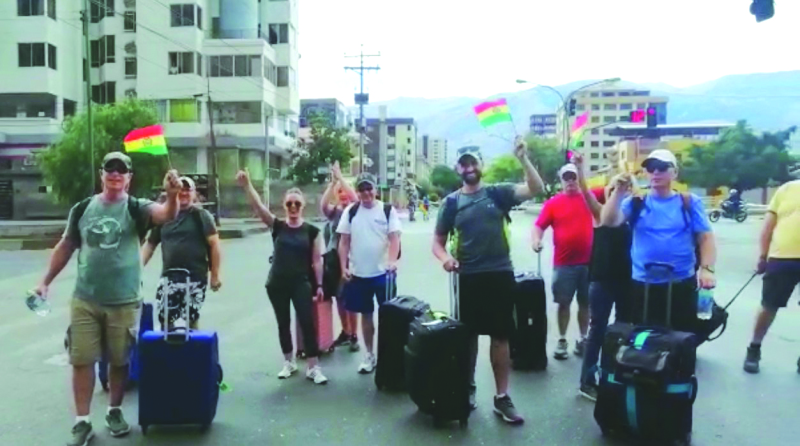 Missionaries wave Bolivian flag as they make their way to the airport.

Pastor Tracy Durham of Vader Assembly of God church was a part of the 2019 Paradigm World Mission trip which took place in Brazil. Here he met with other church leaders of Assembly of God Church.

While there Pastor Tracy and the other missionaries were able to help out one of the local assemblies substantially with financial assistance. A lot of visiting and fellowship occurred with a small amount of site seeing. Much of their intended plans however, changed rather quickly as they found themselves amidst a citywide revolt.

In Bolivia, election day is a national holiday. Businesses close. Transportation comes to a standstill and everyone becomes a pedestrian. There are vendors on the streets from 7:00 a.m. until the 8:30 p.m. curfew. The mission crew were in the city on this day in meeting at a local restaurant enjoying lunch when they were warned by a local that there was a large demonstration coming down the road of angry citizens. And surely there was. From one direction came the demonstration, and from the other, the local police in force. Tracy and others evacuated just in time back to a hotel.

Apparently this year's election appeared to be rigged. This was later proven to not be the case but at the time, it looked like it, and the citizens were not pleased. "The first thing they did when they found out the voting may have been rigged was to go to the voting centers, kick in the doors, and burn them to the ground," Tracy stated. The entire city shut down. Every road was blocked with anything that could be found: branches, bricks, cars... Pastor Tracy and his fellow missionaries found themselves right in the middle of complete political unrest.

The missionaries were able to be received by their hosts, the Campbells, who lived securely in a gated community. The trip there however, was no easy task. Because of all the roadblocks, their driver had to drive over sidewalks, through parks, and squeeze between parked vehicles. They made it safely through to the home of their hosts where they stayed until it was time to make the trek to the airport and return home.

By this time, it had been several days into the citywide revolt. The road blocks, were still present. Pastor Tracy and 12 others had no choice but to walk with luggage 7 ½ miles to the airport.

Tracy retells what that trek was like, "We were not sure what to expect. We were 13 gringos walking through the city amidst the chaos. We were not sure how people would react to us." Tracy continues, "Our hosts had given us all souvenir flags of Bolivia. One of our guys had the idea to take them out and start waving them as we made our way through the streets."

"We each had a flag that we were waving yelling out, Viva Bolivia! Viva Bolivia!," he said. "The standoffish, almost hostile, attitude of the locals immediately changed. They started cheering at us and waving. Many were taking pictures and videos. Some even helped carry our luggage!"

Once it was clear that the forgien missionaries meant no harm and even gave their support, their path to the airport was safe and clear. "It felt like we were in a parade," he said and on they trekked. "It took us four hours to walk to the airport." They arrived and spent the night at the airport before a 34 hour flight back home.

"Oh yes. We were exhausted" laughed Tracy. "But no one was hurt. Everyone made it home completely unscathed. No one complained. Everyone really worked together to get through it."

"I journaled every day," said Tracy holding up a little black book. "Surely after something like this, one has so much to reflect on and give thanks for."

They made it out in good time from the sounds of it. Tracy heard that not long after they had left, things became very violent in that city. The streets were even more packed with people. "I don't think we could have made it through if we had stayed longer," he said.

Home now and safe, Tracy has a very interesting story to tell for years to come. When asked if he would go again Tracy replied, "In a heartbeat."