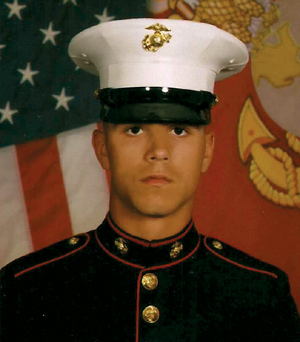 Cpl. Jacob T. Allen, a 2010 graduate of Winlock High School, has returned to Camp Pendleton from his first deployment.

Cpl. Allen was assigned to the 13th Marine Expeditionary Unit (MEU) in August of 2013. The mission of the MEU was to provide geographic combatant commanders with a forward-deployed, rapid response force capable of conducting conventional amphibious and selected maritime special operations, at night or under adverse weather conditions from the sea, by surface and/or by air under communications and electronic restrictions.

While on deployment, Cpl. Allen & his battalion landing team provided security measures in Syria, off the Coast of Africa, China, Kuwait, Iraq, Afghanistan, & most recently in South Korea.

During this deployment, Cpl. Allen became a father to a son; Kaleb born in September, whom he will meet for the first time upon returning home.

The family of Cpl. Allen extends many thanks to those who supported him through prayer and well wishes during the last eight months. A traditional "homecoming" event will take place in early summer at his family’s Toledo home once Cpl. Allen has completed debriefing and other military obligations.