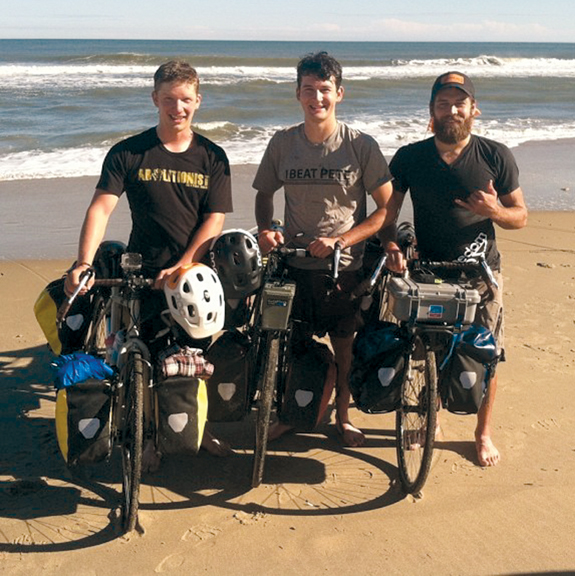 Jesse Cummins (left), 21, of Chehalis, Matthew Wallace (center), 20, of Winlock, and Andrew Wallace (right), 27, of Boise, Idaho, at the Atlantic Ocean in Virginia Beach, Va., after riding for 89 consecutive days from Neah Bay, Wash. Their trip had been intended to raise awareness of human trafficking and a documentary of their journey, including interviews with victims and advocates, is expected to be completed this summer.

Three men originating from Lewis County who set out on a cross-country bike ride this summer have returned from a successful trip and are planning to have a video of their experience completed in the coming months.

But their journey was not simply about traveling across the United States. They were hoping to raise awareness of human trafficking, and their encounters with victims, as well as interviews with advocates, are expected to be a significant part of the documentary.

Since leaving from Neah Bay, Wash., on Aug. 22, Andrew Wallace, 27, of Boise, Matthew Wallace, 20, of Winlock, and Jesse Cummins, 21, of Chehalis, biked for 89 consecutive days through 15 states before reaching Virginia Beach, Va., on Nov. 18. Their journeys through mountains, along shorelines, amid traffic and among victims and advocates of human trafficking were thoroughly documented and are in the process of being edited into a film by Boise-based Crash Eleven Productions, with a final cut expected to be released this summer.

“We are all stoked for the film of our journey,” the group said in a release on their Facebook page. “It’s going to be amazing.”

“The fight is global, the battle is local,” he said. “Every win for love is a blow to slavery, everywhere. If you mow the lawn for the widow next door, you help to end slavery.”

Expected to be featured in the video are stories of their encounters with human trafficking, such as finding a truck weigh station in New Mexico where they were told 86 cases of human trafficking were encountered in 2012, as well as encounters with many student and professional advocates across the country. But also expected are some events more unique to the riders themselves, such as spending Halloween night camped out in a cemetery in West Virginia, and the story of Matthew Wallace being struck by a hit-and-run motorist on the very last day of their journey.

“What sweet relief to realize a scraped elbow and a bent rim will not stop us,” said Andrew Wallace of the incident.

Their efforts at raising awareness have yet to cease, though they have returned from their trek, and updates about ongoing activities can be found at www.winlove.org or www.facebook.com/Winloverevolution.