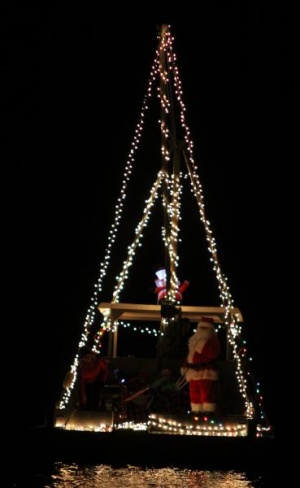 The Willapa Fish and Oyster dredge of Bay Center takes a run down the Willapa with Santa on board. Santa arrived to greet children who were waiting for him during the Lighted Boat Parade in South Ben

As part of the South Bend Lighted Boat Parade, Santa, along with a pair of oyster boats decorated for the occasion, came ashore to deliver the jolly man who greeted kids that lined the dock at Robert Bush Memorial Park in South Bend.

As the scene was being set for the arrival of St. Nick, the 101 Public House along with Elixir Coffee, Tea and Flowers, and Valerie's Salon, were hosts for the occasion that prompted Santa's stop in South Bend.

As Santa arrived on the Willapa Fish and Oyster dredge, the Petit Family of South Bend played taxi to the man in red and made a pass in front of the Dock at the Park as Santa waved to the gathered crowd waiting for his arrival. With a quick turn, the dredge made it dockside and the Guest of Honor disembarked to take his place in spending sometime with the kids.

As Santa made it through the crowd with kids trying to get close, Santa took his place in the 101 Public House and sat with each child that showed up and gave them a small present for stopping by to visit with him. The line was out the door of the restaurant with families coming to spend a little time with Santa.

Additionally at the event, vendors were on site to help provide those last minute Christmas items, and the parents were enticed with Holiday Specials like $1 hot chocolates, and live music staged for the occasion.

With the on again, off again scheduling of the Lighted Boat Parade, rained out last year, the Petit Family joined for their second year of the event.

"We got a call at the last minute that we would need to go down and pick-up Santa," said Kara Petit. And it was a joy for the Petit Family to be able to have the boat that would usher in Santa Claus.

With schedules hard to manage to get participating boats in the parade, at least six boats were scheduled to appear, but only two were able to make it in the final hour. Val Rowe of Valerie's Salon stated that next year they vow to start a little earlier to help increase the participation for the event.

Outside after the kids had an opportunity to visit with Santa, a bonfire was lit and families stood around enjoying the night and music from inside the restaurant.

Be on the lookout for next year as this looks to become a popular event in the future.