Lewis County Veterans Parade: Small sacrifices for those who have sacrificed the most 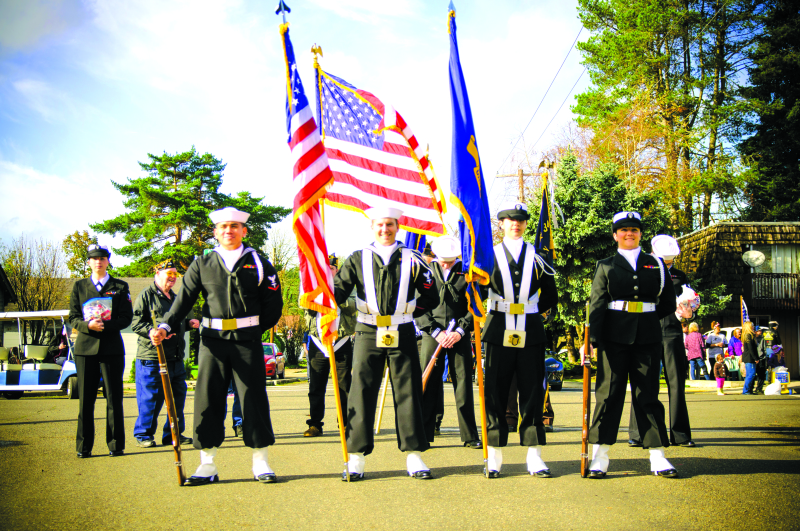 Photo by Lindsay Giberson - This year's Veterans Day Parade was the largest since its beginning.

On Saturday, Toledo and their surrounding neighbors gathered to honor America's veterans, near, far, young and old. Augustus Street in Toledo was lined to both the north and south with residents and veterans alike to cheer on the entries and participating veterans as they drove through the parade route.

This year was the largest parade since it began back in 2010. Eighty-nine entries were in attendance. Participants came from Toledo and as far as Bellingham to take part in the annual event. The variety of entries and floats ranged from classic cars, tractors, logging trucks, horses, town floats, and even cars from the Wheels of Boom.

The Lewis County Annual Veterans parade is a volunteer project headed by April Farey. April's father, Forest Eugene Pennington, served in the Army Air Corps as well as the Marines. Mr. Pennington was onboard a plane that took gun fire while serving in the Army Air Corps. As the plane went down in flames over water, Forest was able to unstrap himself and unhook a fellow comrade whose safety strap had become stuck. The two were the lone survivors of the plane crash and floated atop the wreckage for 24 hours, before being rescued by the Navy SEALs. Forest later received the Purple Heart.

Coming from a family with many who have served in the military, April has always felt a strong sense of respect towards veterans and a deep empathy for all that they sacrifice for our nation. In 2008, while she and her parents both lived in Kingman, Arizona, April took her father to a Veterans Parade. This moment is one of April's last memories with her father. He passed away shortly thereafter on Dec. 10, 2008. To this day, April can still recall the depth of emotions her father's face showed while they watched each float pass by -- all the heartbreak, sorrow, loss and sacrifice held together by his own strength, and a community expressing their gratitude for all he had sacrificed over the years.

After Mr. Pennington's death, April and her mother moved back to Lewis County, and it was then that April felt deeply compelled to recreate the experience she had shared with her father. So in 2010, April set out to create an event that would bring the community together and celebrate our veterans. April says in reference to the emotion she saw in her father's face back in 2008, "If I can do that (for one veteran) once a year, mission accomplished."

The first two years the parade was held in Winlock. By 2012, the parade had moved to Toledo. Initially, April was only armed with her passion. The first couple years yielded minimal donations, so much of the marketing materials and fliers she paid for herself. This year was the first year all expenses were paid for by donations.

The parade has been a family project in years past, but April is hoping to start a committee to handle the majority of the planning for next year. This year will be the last year the parade is called the Lewis County Veterans Parade. With success growing each year and entries beginning to come from near and far, April hopes to find a name that is more inclusive of a larger area. She also hopes to bring back the tradition of crowning a local young lady as Mrs. Liberty.

Lewis County Commissioner Edna Fund was in attendance on Saturday. This was her fourth year attending the annual parade. Edna's husband served in the Air Force, so they make it a priority to attend every year. Being a part of any tribute for our servicemen and women is likely to spark deep emotions of gratitude.

Edna said of the events on Saturday, "I was moved to tears in my eyes when I looked down the street to see the entries, and all those wonderful American flags being waved. Thank you to all involved!" She, like so many other participants and attendees, was very grateful for the stroke of luck in the weather. Despite the week of forecasted stormy weather, the rain managed to dry up in time and the sun made an extended appearance during the entire program.

The parade was followed by a service at the Kemp Olson Memorial Park in Toledo. Wendy Carolan, a veteran herself, coordinates the ceremony every year. She started the tradition in the park during the dedication of the memorial for Air Force man Melvin Holland who passed away in Laos during a civilian mission.

The ceremony began with local musician Kaitlin Carney entertaining the crowd. After the flag salute, pledge of allegiance, and national anthem, Wendy introduced the Grand Marshals of this year's parade. Randy Pennington read the poem, "All Gave Some, Some Gave All," and Kaitlin wrapped up the ceremony with another song.

Wendy Carolan, who also helps coordinate the local school Veterans Day assemblies, says she always feels compelled to reach out to other veterans and remind them that they are loved and appreciated. She hopes that the public walks away from these ceremonies with a personal connection to our veterans. Wendy wants to be sure we never forget that there are still men and women who are sacrificing everything they know to protect America near and far.

What an opportunity for our community to come together and remember that we are in this together. From all of us at the Town Crier, we hope that you took the time to thank a veteran last week. As you go forward, we hope you remember how lucky we are to live in the greatest nation our world has ever known. Get to know your neighbors, spend time bettering your community and remember each challenge is a learning opportunity. The time is always right to thank a veteran, whether it is through a handshake, "thank you," or taking a veteran out to lunch. We owe these brave men and women the world and they deserve our time, energy and respect. It's a small sacrifice for those who have sacrificed the most.

As with many functions in Lewis County, the Annual Lewis County Veterans Parade is coordinated entirely by volunteers. If you would like to help with next year's parade, keep an eye out for a committee meeting announcement at the beginning of next year. Planning for 2017 will begin in February, and anyone who thinks they can lend a hand will be welcome to attend. Likewise, if you would like to contribute financially, donations may be made at Timberland Bank under the name "Lewis County Veterans Parade."