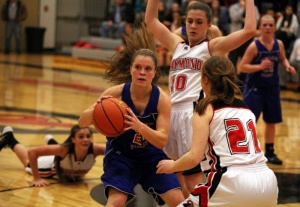 Viking senior Karli Friese gets the rebound and gives the offense another opportunity to score against Raymond. The Lady Seagulls took it to the wire and won on a buzzer-beater.

Raymond now at 5-0 for the season, and the Vikings at 3-1 overall, this game went to the final buzzer, literally, at the buzzer when Raymond took final possession of the ball with 13.1 seconds remaining in the game and Seagull sophomore Mikayla Collins found the basket and gave Raymond the win over Willapa Valley 60-58.

The game looked like another straight out Raymond win as they paced the Vikings 12-7 after the first period. The Lady Seagulls had dumped 10 unanswered points in the first five minutes of the contest and is was not until Willapa Valley's Karli Friese made back-to-back baskets, one was for three, did the Lady Vikings get on the board.

"It was a slow start for us," said Valley head coach Matt Bannish. "We finally started dropping the ball in the basket."

And the Vikings continued to find the elusive round goal stacking up over the Seagulls by 10 at the half. Contributions from Baylee Layman (8 points) and Bailee Betrozoff (4 points), brought the game back for the Willapa Valley team. Friese let fly two of her six field goals, leading the team with 29 points during the second period.

Turnovers were one area that Schray mentioned was how Raymond initially lost control of the game. That and the ability of Valley to amass to overcome their deficit and take a commanding lead with focused shooting and a tougher defense, started to change up the game.

The Lady Vikings led at the start of the third period of play by 10 and it looked like they had figured out the Raymond hardwood game. The tenacity of Seagull Cydney Flemetis coupled with teammate Karlee Freeman, brought the Seagulls back into the fight. With Freeman grabbing a few extra points off a steal and the duo making the long ball like a hot knife in butter, the game started to tighten up.

The Valley lead started to melt away as the Raymond threat of Flemetis and Freeman supported by a change in defense placing Aiysha Garcia on Viking Friese, brought the game to a virtual tie in the final two minutes.

With a narrow lead of just two points, and under two minutes to play in the game, the court looked almost like an all out brawl for control of the ball. Valley was able to chew up some time in their favor with the ability to run the shot-clock twice before giving up control, but a late game steal by Freeman with a run down the court lay-up, sent both oh's and ahh's through the gymnasium as the game was all tied up.

A traveling call against Valley during their next inbound opportunity prompted Raymond into time-out with just 13 seconds in the game. Raymond now in possession and control of the final seconds brought the ball down the court into a fight under the basket that was won by Collins grabbing the rebound and put-back as the buzzer sounded.

"Aiysha was a big part of out comeback helping out on Friese. It was a great team effort for us. When we went into the locker room I asked them if they wanted this or not, you see how they responded. We were able to swing back," said coach Schray.

"It was a tough one to loose, when you lead the whole game", noted coach Bannish, "We turned the ball over in the fourth quarter and it came down to final possession. I am so proud of the kids, how they competed and battled."

The Lady Seagulls next took on Rainier Dec. 12 and beat them 62-31, bringing their overall standings to 5-0 in the early season. The Seagulls will return home to host Northwest Christian Dec. 19.

Valley took on Naselle that same day and beat them 44-25, setting them at 3-1. December 16 they will host Ocosta and remain at home through the Jack Pearson Holiday Classic starting Dec. 29.