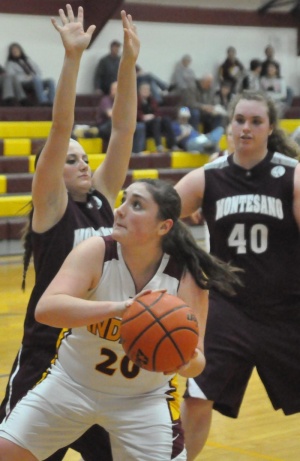 Photo by Steve Rogers South Bend HS junior Rielly Myers looks for a shot against a tough Montesano defender in the Tribe's non-league loss to the Bulldogs.

The Lady Seagulls held the Lady Indians to 24% shooting (13 of 53), while Williams (15 pts) and Garcia (14 pts) controlled the offensive end. Raymond also outscored South Bend at the charity stripe, 10 to 3. The Lady Gulls had way more attempts, 24 to 7, than the Tribe did.

“We were able to grind out an 11-point win in South Bend tonight,” Raymond HS Head Girls' Basketball Coach Jon Schray told the Herald. “We had a hard time getting into a rhythm offensively. They ran a good zone and slowed way down. I was pleased with the effort put out by our players tonight. The really stuck it out and maintained the lead right around 10 the whole game despite our shooting woes.

“Hailee (10) and Aiysha (12) were tough as usual pulling down 22 boards between the two of them,” Schray noted. “Mikayla Collins had another good night for us leading the team in steals. Winter Newman did some really good things defensively coming with a couple steals in the limited minutes her chest cold would let her go game speed.”

Raymond upped its overall record to 11-5. The Lady Gulls are 7-1 in the Pacific League.

“We were extremely cold to start with,” South Bend head coach Gary Wilson told the Herald. “We had a hard time getting things going.”

“We had a decent shooting night  tonight against Tenino getting (44%) percent from the field. Aiysha and Mikayla did a great job playing the post 2-man game in the first half. They came out and really packed it in to the key in the second half and we responded by hitting 5 of 10 from behind the arc and brought them back out so we could drive it back inside. I was very pleased with the passing form the whole team tonight. We did a great job sharing the ball getting three players in double digit scoring.”

Undefeated Montesano mauled host South Bend 64-38 last Wednesday. The Lady Indians trailed by only one (16-15) after one quarter, but then scored only 23 points the rest of the way.

Sierra Cearns threw in 13 points for South Bend, while connected on only 11 of 40 shots.

Montesano improved to 15-0 on the season. The Lady Bulldogs made good on 24 of 69 shots.