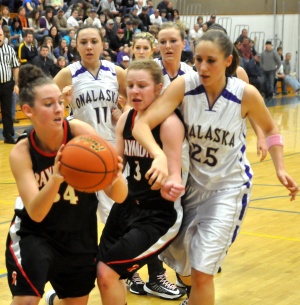 Photo by Steve Rogers Raymond's Abby Maneman (34) grabs a loose ball while teammate Hailey Williams (3) gets mugged on the play in the Gulls' tough district tournament loss against a strong Onalaska team last Saturday at Rochester. Maneman drained the win

The Raymond Lady Seagulls are the only local team of five competing at District to qualify to the Class 2B Regionals. Raymond earned a spot by taking out Wahkiakum 54-51 in a loser-out game last Thursday at Rochester.

Wahkiakum missed a long-range trey with three seconds to play in an effort to tie the game.

Raymond drained 10 of 22 shots from 3-point-land, while the Lady Mules made only three treys.

“We had a very specific game plan to frustrate their key shooter, and rebound well,” Raymond HS Head Girls’ Basketball Coach Jon Schray told the Herald. “We were able to do both for most of the game. Abby (Maneman, 17 pts, 11 rebs, 6 asts), Courtney (Hagain, 12 pts) and Hailee (Williams, 12 pts) combined for 10 threes to keep us up in a very physical game. They came back on us in the fourth quarter after some offensive breakdowns gave them some of their confidence back, but fortunately our lead, and our defense were too much for them to overcome.”

Raymond was defeated by Onalaska 46-42 at Rochester Saturday afternoon. The Lady Seagulls came back to defeat Toutle Lake 55-53 Monday afternoon on a trey by Abby Maneman with 10.1 seconds to play to earn the No. 5 spot for Friday’s Regional and shot at a trip to State.

Hagain (16 pts) and Maneman (15) combined for 31 points to carry Raymond past Mossyrock in an elimination game at the District IV Girls’ Basketball Tournament at Rochester last Tuesday night (Feb. 12).

“We felt good going into the Mossyrock game after making some adjustments to our man-man offense,” Schray said. “I wanted to get Courtney some more looks on the perimeter and she responded very well. She was 100 percent from the field to including 4 of 4 from behind the arc. They made a good run on us in the fourth quarter but we made some adjustments and closed the door on them.”

The Lady Seagulls flew out to a 17-2 and never looked back after the first quarter. Raymond upped the lead to 29-5 at halftime and 41-16 heading into the fourth quarter. Mossyrock outscored Raymond’s reserves 19-10 in the fourth quarter to make the score look respectable.

Hagain was 5 of 5 from the floor, including 3 of 3 from 3-point range, and was 2 of 2 at the foul line. She also handed out three assists.