Kalama Wins Round One over Indians 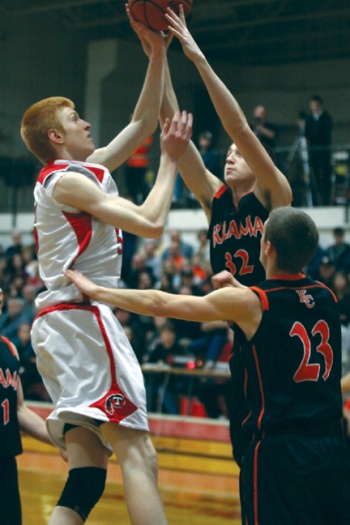 Blocked! Brennan Rakoz goes up for what looks like a great shot but is disrupted by two Kalama defenders. The Chinooks handed the Indians their first loss of the season with a 56-41 performance.

Anyone in the Toledo High School Gymnasium Dec. 21 must have been confused. It was the team in black that dictated tempo, applied intense full court pressure and hit shots like the rims were two-feet wide.

In reality, Kalama came to play as they left the home-standing Indians in their wake with a bruising 56-41 loss in 1A Trico League play.

"They had an intensity that we didn’t," said Toledo forward Austin Trafelet. "They out played us tonight. That was all there was to it."

Kalama kept nearly all of Toledo’s weapons at bay. They allowed prolific scorers Trafelet, Brennan Rakoz and Brent Wood to 7, 13 and 8 points respectfully. Only Joe Durham appeared to have a good game with his 10 points and assortment of rebounds. Despite his scoring troubles (he was held without any points through the first half) Trafelet grabbed 14 rebounds.

Meanwhile Kalama threw up shots and shots went in. Overall the Chinooks shot 44% from the field (and 75% from behind the arc) while Toledo hit just 31% of its attempts.

Toledo falls to 7-1 on the season and will play in the Wilbur-Ellis Shootout in the Yakima Sundome on Friday and Saturday.