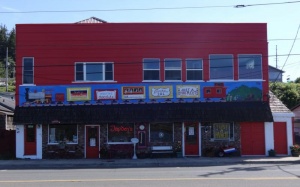 Jayden’s German Store is located on Highway 101 in the same building as Just a Haircut. The building was painted a lovely red over the Fourth of July weekend.

Having started out as a candy shelf in her barber shop, Just a Haircut, next door to the current shop, the German shop has been owned and run by Joelle Springer for four years. “I had customers always asking if I could get any German stuff,” Springer recounted. “Right around Christmas, I would have bought extra of my own Christmas stuff I wanted, and I would put it up on a shelf in the barber shop and they would come and buy it. My customers would buy so much and they would say, ‘Get more, get more!’”

She opened a chocolate shop in a small room behind the barber shop, but now it has its own storefront next door, with the help of her partner, Ron Jenkins. Springer named the shop after her son Jayden, now 10-years-old, who helps pick out candy items that appeal to children. “We started with sweets on Christmas, so a lot of people label us as the chocolate store, which is very loving, I think. But it’s far beyond chocolates,” Springer explained.

A favorite of customers is the Katjes Fred Ferkel gummies, real fruit juice gummies in the shape of Fred the piglet. “I very much make sure all the items have no artificial flavors, no artificial color – I’m very much into health. I import only good stuff,” Springer said.

Customers also love the 20 variety line of Rittersport chocolate bars. “The deal behind the Rittersport line is, the couple who developed it, the wife of the husband who had the company originally, Mr. Ritter, tried to develop a bar that would fit in the gentlemen’s sport coats. So, that’s how the little square came about.” The current Ritter family who owns Rittersport makes an effort to produce environmentally friendly chocolates and all the packaging is bio-degradable. “Germany is very much into being environmentally friendly and so am I,” Springer continued.

Locals make up the majority of Springer’s customer base. “It’s actually my in-towners, and not just in South Bend, but from the area, who are my true customers. I like having tourists and that’s wonderful, but you can’t make it through the winters without the tourists, so you can’t base a business off that.”

“We have an opening sign, but we’re always open, basically. All my customers, they come in and they know they can just call. Mr. Jenkins lives in the building and he’ll come when he’s home,” Springer said. The set hours are around 10:00-5:00 during weekdays. It’s also open mostly on the weekends. Contact Springer at (360)451-1051 to check availability.

Springer often holds open houses, supplying those in attendance with free samples of her products. Check the store’s Facebook page under ‘Jayden’s German Store’ for information on the next open house.

Springer herself moved to the U.S. from Germany 24 years ago. She settled in South Bend after living in eight other states and has been here for six years. “I thought the grass was greener,” she said about why she moved to the U.S. “It was hard, it was very hard to start. . . I think it grew on me.”

Before moving to the U.S., she grew up in a small town area, in the suburbs of Berlin, called Altglienicke. “Basically where I grew up, everybody cooked, everybody gardened, everybody canned, and you knew everybody,” Springer explained. “I realized, literally in the last year, that I grew up in a town like South Bend. A lot of people always say, ‘You’re too far from home,’ and I always tell them, ‘I am home.’”