It's all about the Minions 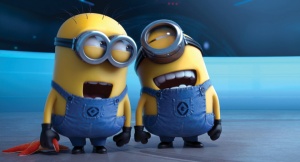 When I sat down to watch Despicable Me 2, by Illumination Entertainment, I was amped up for more of the slapstick action and super villain humor that made its predecessor a gem, and I was not disappointed.

While deviating reasonably far from the plot and theme of the first movie, this makes a miniscule difference as the level of charm, wit and minion antics did not change a bit.

At the beginning of the film, we see a mysterious magnet ship swoop in and fly off with an entire secret government laboratory stuck to it. No one says what the researchers are up to or what the thief wants with them, but it’s pretty exciting to watch, nonetheless.

Then we are at the home of Gru (Steve Carell) hosting a birthday party for the youngest of the three girls he adopted at the end of the first movie, and making every effort to supply them with a wholesome, villainy-free environment. But his efforts don’t last as the reputation garnered during his previous life earns him a clandestine audience with members of the Anti Villainy League AVL, care of Agent Lucy Wilde (Kristen Wiig).

The AVL wants help finding whomever stole the laboratory and they have a list of possible suspects, but they need Gur’s instincts as one of the best villain’s of all time (he stole the moon, for goodness’ sakes) to help track down the culprit.

This is about as far forward as the plot moves for a good chunk of the movie, but the story isn’t why people would want to watch it, nor why they should. It’s the performances from the voice actors, large and small, that make the film endearing from the get-go. Much to the credit of the animators, who were able to capitalize on her over-the-top body language, Wiig deftly steals the show as an overzealous young agent eager to fight villainy and do right by the AVL.

But no one could take the screen away from the minions (voiced by Pierre Coffin and Chris Renaud) with their almost-French-almost-Ewok musings and earnest, though sometimes accident-prone, devotion to their boss. If you enjoyed the first movie just for these little guys, you’ll love its Despicable Me 2.

And for those who intend to see it in 3-D, it’s totally awesome. You could tell the animators knew just how much they were wowing and/or freaking out the audience with visuals that seem to come right for you, but it doesn’t seem like the kind of styling that would spoil the 2-D experience, either.

All in all, I would highly recommend this film for anyone looking to entertain their kids of just themselves. Some parts of the movie were a little darker than I thought some parents might enjoy, dealing rather directly with themes like murder and grievous bodily harm, but it stuck to its PG rating enough to please the more picky movie-goer.
Read more from:
TC - Business
Tags:
None
Share: