How Toledo got its name 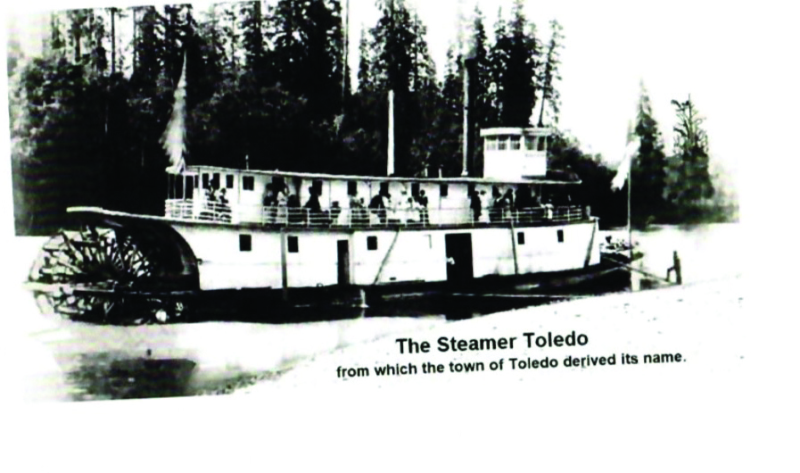 By the late 1850s the farms of Cowlitz Prairie and farms along the river bottom were producing exceptional amounts of hay, oats and potatoes. So much, that a large market was needed. Up until this time produce along with all kinds of other goods were transported along the Cowlitz River in canoes manned by Cowlitz Indians, who made their living transporting goods. One such man was George Katel or as he was affectionately called Indian George. He was well known in the area.

The canoes however, were not enough to transport the large amounts of produce now needed to be shipped to various locations. This is when the era of steamboat navigation on the Cowlitz River began. In 1861 the first steamer on the Cowlitz River appeared. It was called the Belle which was actually piloted by Indian George. The next after that was the steamer express.

In 1863 The Monticello and Cowlitz landing Steamboat Company built the steamer Rescue at Monticello (now Longview). This boat was ninety-five feet in length. It made its first trip in 1867. The Cowlitz Landing Steamboat Company was the third company to organize and attempt transportation by steamer. Of course, they were successful. By 1870 the Winette was making regular runs on the Cowlitz River. After her, came the Rainier and Ohio.

In 1878 the Steamer Toledo was built in Portland Oregon for the Kellogg Company and from this, Toledo gets its name. She was a beauty at 109 feet long with a 22-foot beam and four-foot hold. Her net tonnage was 207 tons and she was powered by two ten-by-forty-eight inch steam engines. Captain Edward and Charles Kellogg commanded her during her 13 years on the Cowlitz.

Captain Oren Kellogg purchased an acre of ground from the Rochons in 1881 to build a warehouse. Augustus Rochon and his wife Celeste, gave a celebratory dinner after the purchase with the captain as the honored guest. Also at the dinner were J.W. Caples, Hilaire Nollette, and G.W. Loomis. At one point during the dinner, Captain Kellogg suggested to Mrs. Rochon that she name the new town. Being that the Rochon home was on the river bank, it was not uncommon to look out, and see a steamer floating by. It was at this time that the steamer Toledo was passing. Mrs. Rochon looked out of the window at that moment and layed eyes on the name, "Toledo." And just like that, Toledo became Toledo!

Other notable steamers were the steamer Kellogg which was a double decker. Steamer Kellogg was 128 feet long and 322 tons. It was later rebuilt in 1900 and became the steamer Madeline. Steamer Northwest drew only six inches of water and was 135 long. It is said that Northwest's captain was a "swell person" and very well dressed. This boat was on the river from 1889 to 1907 when it transferred to Alaska and sadly, was wrecked. She saw a lot of service on the Cowlitz in her time and carried all sorts of cargo. A life well lived!

This was all before the era of the railroad, so a large amount of produce and freight came on these steamers from places such as Salkum and Mossyrock and were warehoused in Toledo. The locals at the time enjoyed going down to the river banks on Saturday afternoons to watch the boats come in and unload. It is easy to imagine such sites along the river. And yet it seems so strange to think about. How lovely it would be to experience the era of the steamer or to have them once again grace the Cowlitz River ways even if only just for the pleasure of it.

In the final days of the steamer, the last to make regular trips from Portland to Cowlitz Landing was the 100-foot Chester. Chesters last trip was in March 1918 and was only able to come as far as half a mile below the Kellogg's Warehouse. Mr. and Mrs. George Day were passengers on this trip disembarking at Castle Rock. They had made the trip solely for old time's sake. Arthur Riggs was the captain. On April 14, 1918, the last steamboat trip to Toledo was made by the steamer Oregona.

These boats had many landings all up and down the river as they brought freight from Portland and delivered along the way. At different landings, they would load up with potatoes, hay, and cream among other products. Some of the men who served as company agents for these sternwheelers were Charles Divine, A.E Thorne, and R.G. Paxton.

Boat trips to Portland cost one dollar. A one-way trip took 24 hours! Along the way the boat would stop at any landing along the river and pick up things like a pig, a can of milk, a cord of wood, or anything needing to be taken to Portland. Captains would get supplies for the farmers and bring them back, leaving them at the landing nearest their homes. For 25¢ one could purchase a meal on the boat. As stated in "The Toledo Community Story" a collection of historical stories, "this must have been the Good Old Days" and surely, it must have been.

You can learn more about sternwheelers and other local historical facts from the Toledo area when you visit the Toledo Historical Society located in the Toledo public library. The historical society is also looking for any volunteers to help where needed. Inquire at the library.