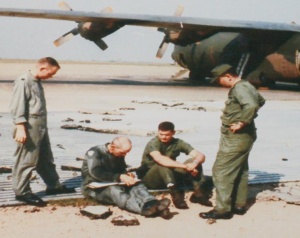 In Raymond, the home of the once celebrated All Nations Day Parade, a six year old, dressed in traditional Mexican attire, won the day with his senorita, in 1940. The two kids, Jerry Gould and Claudia House, were featured in the Harbor Herald, but we never knew that Jerry would one day be a member of the military serving over 21 years in the Air Force helping the United States efforts during the Vietnam war.

“I grew up here in Raymond, born in 1933, and remember what it was like with the pre-bombing attacks of WWII,” said Gould.

As a kid growing up in Raymond, Gould was like any other young boy playing with his friends, building forts and pretending to be soldiers at war with other boys of the community.

“I was interested in uniforms and wooden guns, we played fake wars and built forts and did boy things,” Gould said. “We played Army, not cowboys and Indians.”

As he grew up, Gould was also very aware of what was going on nationally, as much as one could be with media of the 1940’s.

“Everybody of course heard about Pearl Harbor, when the broadcast came over the radio,” Gould said. “Everyone across the nation and here in Pacific County, were ready to fight, ready to go to war and fight. It was kind of like the reaction we saw to 9-11. All the kids in high school wanted to quit and go to war, but they were too young. At the time that it happened, I was around 9 years old.”

The innocence of the youth of a nation was stripped on that December night in 1941, and WWII had begun for the United States.

For the kid who spent his summer months at the Oregon Filbert farm of his grandparents, the son of a dentist, Gould started his future path and never saw it coming.

“At the time that Pearl Harbor happened, even I wanted to go, but of course I was too young to do anything but play games. There was a great concern in the community.”

Anyone who could, seemed to join the war effort, and it would be the acts that surrounded him that would keep Gould on his eventual path into the Air Force where he would spend over 21 years and retire as a command pilot with the Air Force as a Major, earning the Bronze Star during the Vietnam war in Saigon.

“My father went to Ft. Lewis and tried to enlist, after the attack on Pearl Harbor, he was a dentist<’ Gould said. “He got turned down for having flat feet. You didn’t get in with flat feet (because) you had to be able to march. But he did help with a young man who was trying to get into the Navy in Naselle. He fixed his teeth so he could join up, at 17 or 18, the kid got turned down from the Navy for having poor teeth, dad fixed his teeth at no charge.”

Gould reflects that he never really knew about his father, George Gould, helping out in this way until he found a letter that spoke of it in his father’s belongings. But he did remember first hand that his mother, Opal, did help the war effort and sometimes was with her when she performed her duties.

“Mother joined the Civilian Observer Corps, a group of volunteer civilians who would take shifts observing the sky for airplanes from local forestry towers. They would do a shift and report anything they saw to the base using a crank telephone. She was awarded a set of Silver Wings and a special letter for her service.”

Gould’s youth was peppered with images of a nation under siege and people trying to continue a normal life. The attack on Pearl Harbor was further exacerbated with the 1942 attack on Fort Stevens, Oregon, and was very close to home.

Three years later Gould joined the Civil Air Patrol Squadron, and with other youths of the community would parade around the Quonset huts with their wooden rifles.

“As a freshman in high school I flew gas-powered model planes and had always had an interest in aviation,” Gould said. “At graduation, Jim Thrasher – our school Principal, wanted to know if I would be interested in joining the Reserve Officer Training Corps. I said yes and he helped me with a letter, which I took to Washington State University and joined the ROTC. I completed my studies with a degree in Anthropology.”

As school was finishing for Gould, the build up for Vietnam was already underway. Gould was on his way as if his life and been laid out for him.

“In 1956 I joined the Air Force. It was like some one had lain railroad tracks in front of me and I just followed them. I never intended to stay in the military, outside of getting some aviation experience.”

Entering basic training in Texas, Gould would fly several training crafts to include the B-25, B50 and eventually the C-54. His training took him from Texas to Louisiana and Florida. His first assignment he thought was going to be related to air rescue, but turned out sending him into the clouds in a different manner.

“Now a second Lieutenant with basic wings, I had to select an airplane of choice, I took one in Bermuda, which I thought was a search and rescue plane, turned out it was a Hurricane Hunter.

Gould took to the skies tracking hurricanes and crossed into the eye of 20 hurricanes 34 times. Data gathered from his missions helped troop movement on the ground and strategic planning.

“The Navy first had a hurricane program but kept loosing planes. The Air Force gave it a try and made a go of it. Weather is a very important factor in planning battles, and that is what we did.”

Three years as a Hurricane Hunter, Gould was transferred to Virginia and was introduced to jets. His assignment provided in flight re-fueling operations.

“We were working with fighter groups getting them in place into Vietnam, before it really became a war, which would be my future.”

Gould received intensive training in the C-130. With his new plane assigned, Gould would become one of the workhorses of the Vietnam War. His unit, the 463rd squadron, worked with the 82nd Airborne, running paratroopers, munitions and cargo missions. During the height of his rotation in support of hostilities Gould was stationed at Clark Air base in Manila. The group flew everyday for a two-week rotation and carried everything from timber to bombs, to troops and supplies in and out of Vietnam.

After his missions in Vietnam, Gould returned to the states but was sent right back as the director of missions in Saigon.

Gould was present during the infamous Teat Offensive in 1968.

“The base was all under attack during at this time, and we only had a bunker to hide out in during the rocket attacks.”

Gould would fly over 1,000 combat sorties in South Vietnam and be awarded the Bronze Star for his actions. He also has an Air Medal with 13 clusters, and his Command Wings, among many other awards and citations.

Gould finished out his military career with assignments at the Pentagon assigned to Andrews Air Force Base, with the Headquarters Command Flight Training Office as the Assistant Training Officer for the T-39 Jet Unit, and later as the Officer in Charge for the AERO Club at Andrews over 450 members with 25 aircraft.

With a new future handed to him at his retirement, Gould took advantage of one final offer from the military and went back to school to receive a Bachelors Degree in Photography from the Brooks Institute. Gould and his family spent the next 21 years in Santa Barbara, Calif. owning and operating a his own store, Camera Plus.

He eventually sold the business and digital photography was starting to become the new fad of the day and moved back to Raymond.

Today, you may find Gould down at the Raymond Farmers Market were he is always willing to help people with any photography questions and works with the Veterans Memorial Museum located in Chehalis.