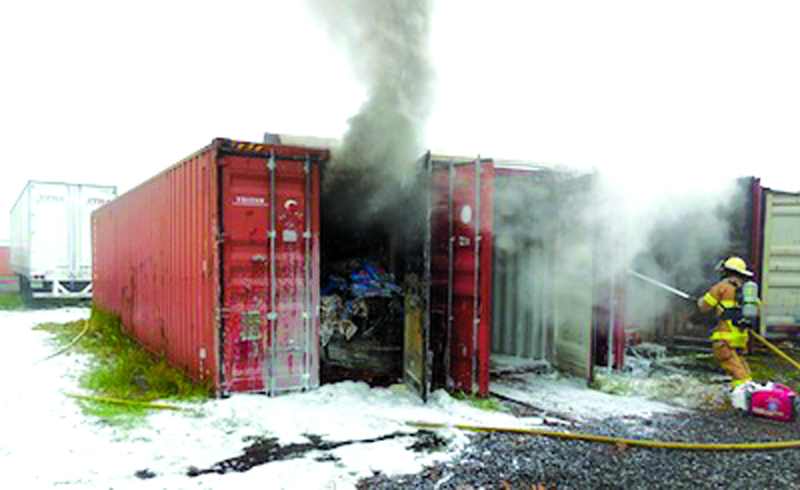 Photo by Derrick Paul - Firemen try to extinguish the fire caused by vandalism at Jake's Fireworks.

Fire investigators are looking into the fire at Jake's Fireworks as an act of vandalism after the Winlock business suffered an estimated loss of $100,000 worth of fireworks.

Workers out of Lewis County Fire District 15 spent about 12 hours Saturday at Jake's Fireworks on the 700 block of Nevil Road. Fire Investigator Derrick Paul said he is working with the sheriff's office on the case.

Paul said when employees got to work they discovered vandalism and walked through the property looking around when they discovered smoke coming from one of the many large metal cargo containers on site.

Most of them are locked and used to store fireworks, but the one was used for recycling, such as cardboard and was unlocked, Paul said.
When they opened it to investigate, and allowed oxygen inside, the fire "really took off," he said.

The radiant heat ignited contents of other cargo containers, according to Paul.

The vandalism that occurred sometime since the day before included someone tampering with the fire suppression system, according to the Lewis County Sheriff's Office. Chief Deputy Stacy Brown said their $7,000 water storage bladder had been sliced open.

A tire on one of the trucks was punctured as well, according to Brown. Paul said between the vandalism and the items destroyed by the blaze, the loss is upwards of $100,000.

Brown said there is a person of interest and the business is working on providing detectives access to footage from a surveillance system.