Fair returns to its memorable roots 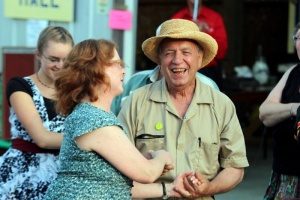 Photo by Larry Bale Swing your partner! Fairgoers were treated to some fine music and a whoppin’ good time at this year’s county fair.

“I was thrilled to see how the community came together,” Fair Manager Scott McDougall told the Herald. “I have never seen a day like Friday was. We had 5,300 on the fairgrounds, which was 1,200 better than the best day last year. People had a blast. The credit for that needs to go to the community itself. I acted as the facilitator. It’s the community that stepped it up and made it happen. This community is an amazing place. I can’t imagine having a fair without them.

This community stepped up and made it happen.

“You cannot get a better deal for four days of entertainment,” McDougall said. “We had 32 acts in four days. We had some great, great concerts. They were all really good. I did not have a bad stage show in the group they were all uncommonly good. I could not have been happier with the quality of the entertainment. And, a lot of the costs were offset by sponsorships. A number of entertainers who performed did so at less than their normal fee.

“Last year the fair was not a particularly exciting place to be,” McDougall said. “Last year the same people would come out for specific events, and they’d leave and come back. That drove the numbers way up. This year we had people excited to be at the fair that came in (during) the morning and left in the evening,

“I want to give a big thank you to Steve Stigar (in charge of maintenance). Steve and his crew did an amazing job of making sure they made the fairgrounds look spectacular all week. Steve’s job is behind the scenes. I couldn’t have done it without him. I couldn’t imagine a better department to work with.”