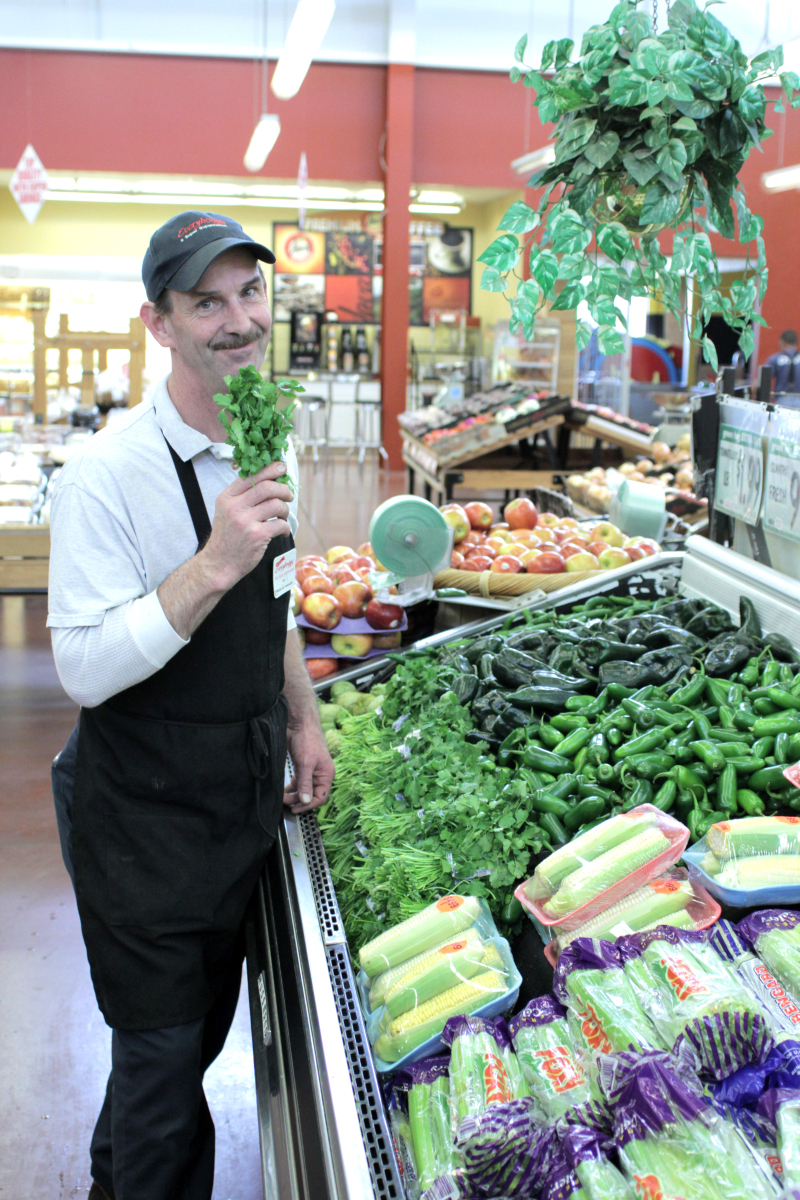 Bo Winningham shows off the fresh produce in the Raymond location. After extensive remodelling of the Everybody's store the new owners are rebranding as Thriftway.

The Everybody's supermarkets in Elma and Raymond are slated to be re-branded to Thriftway in a Grand Opening on May 4. Franchise Owner Matt Marcott acquired the Everybody's Supermarkets from Jake Myers in November of 2015. It's been six months since the brand has changed hands, and Marcott spoke to what it has been like running the new store locations, "The new ownership has gone well; we hired when we came in but every single person kind of ended up transitioning with us and so it was a smooth transition. At this point we have concentrated on item selection, we've brought in a lot of new items to the store, both conventional and natural," said Marcott.

The new owners are overhauling the departments, "We're working on redoing the produce, bakery, meat departments. We're painting and kind of polishing the stores up. Getting it ready and fresh to kick off the new Thriftway," said Marcott. Marcott mentioned that there will be a lot of observable changes once you come in for the grand opening of the new brand name. Marcott also said that they weren't the only changes to be expected: "then we have changes planned that will be implemented throughout the next few months as well," said Marcott. The selection of items will continue to improve and any suggestions that customers have that they'd like to see, the management at the store would like to hear about. "Anything that they've missed that haven't been there or anything that they want when we're done changing things that isn't there, we would like to hear about," said Marcott.

Marcott went on to talk about their company, and how they are a small-community type of company, "We're a family owned company it's me and my sisters. We really like to connect with the communities. We're all small community stores with the exception of one in Portland, and we find that it is really important to connect with the communities," said Marcott. The store owner went on to talk about how they love to get involved in the communities locally and how they capitalize in this style of business. " So there's several stores connected within the group but we think it's important that every store has it's own identity and they run quite independent of each other. What ever fits for the customers, the town, the community. We don't try to take our style and what we want and try to force it into the community. A lot of the chain stores cannot do it that way. It's much easier to be tailor-made to a community because we are smaller. This way works best for us," said Marcott. Stop into the local Everybody's to see what has changed, and certainly be sure to check out the grand openings of the Thriftways on May 4.