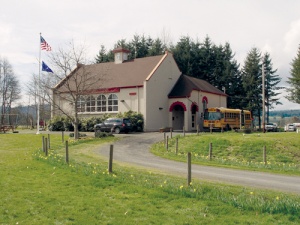 The Evaline School District has come forward to oppose letter grades recently assigned by the Washington Policy Center (WPC) to schools in the state.

Lewis County’s oldest district with just one grade school to its name, Evaline was given an "F" in the report published Feb. 13 with WPC citing Evaline’s failure to meet multiple grading criteria. (It should be clarified WPC is a private lobbying group and not an entity of Washington State.)

"It was really a disappointment to the Evaline School District," he said. "This seemed an untrue and unfair categorization for the school."

The alternative learning programs in Toledo and Winlock also received "F" grades, with officials stating their opposition and concern during recent school board meetings. Administrators have said analysts did not look at other important factors that contribute to education such as teacher-student interaction and individual student improvement levels.

"There are other measures of successful schools that this doesn’t begin to look at," said Crawford, acknowledging the criteria able to evaluate small schools like his cannot always be empirically calculated.

He added that he is not opposed to using new ways of evaluating schools or even using the methods employed by WPC, but that an open dialogue needs to exist between policy makers and school administrators so new expectations are clear and can be realistically met.

"Let us know what you expect us to do and we’ll do it," he said to lawmakers, adding that new evaluation methods will not "change our priority of trying to become a better school."