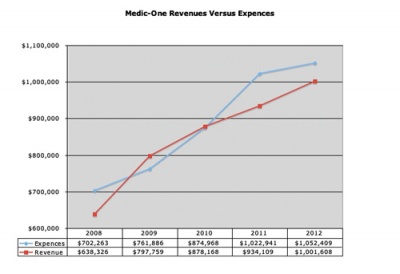 A graph indicating the steady increase of revenues and expenditures for Lewis County Medic-One over the last five years. With the exception of 2009 and 2010, expenditures have exceeded revenues.

Local EMS officials are nearing a compromise to continue operating Lewis County Medic-One after Fire Districts 15 and 20 had submitted their intent to withdraw from the program earlier this year.

Formed by an interlocal agreement between Fire Districts 15 (Winlock), 2 (Toledo) and 20 (Vader/Ryderwood), Medic-One has seen a steady increase in expenses and a decrease in revenues in recent years and interlocal leaders have disagreed sharply on how to sustain the program.

Districts 15 and 2 had been asked to contribute roughly $15,000 apiece this year to keep from depleting financial reserves while no such request had been made of District 20, with officials citing the district’s significantly lower budget compared to the others.

During the April 16 meeting of the Interlocal Board, letters of intent were discussed in which Districts 15 and 20 stated they were willing to leave the interlocal should finances not be brought under control, but Medic-One Operations Chief Grant Wiltbank asserted he could not identify any non-essential expenditures in the budget, adding increases in the costs of fuel and medical supplies, as well as decreases in Medicare reimbursements, were out of the interlocal’s control.

During the May 21 Interlocal Board meeting, District 15 Commissioner and Interlocal Board Member Randy Pennington reasserted his district’s view that all member districts should be asked to contribute funding or none at all, stating it would not be fair to taxpayers within his district to do otherwise. But he stated District 15 would not object to providing necessary funding to Medic-One if it came with proportionate services for his district, stating he sees a distinction between a general contribution and payment for in-kind services.

As an example of what he had in mind, Pennington stated a medic could be stationed at District 15 headquarters for a number of days throughout the week and work with District 15 as an additional service from Medic-One, which would then warrant additional payment to the interlocal. Wiltbank said he was prepared to offer District 15 a solution along the lines of an exchange of services but said it would not be appropriate to describe the details before speaking with District 15 commissioners.

It is also uncertain if the potential agreement would require the revision of a decision made April 15 by District 2 commissioners to pay the requested $15,000 to Medic-One on the condition District 15 would do the same.

If a compromise is reached that would serve the interests of the interlocal as well as member districts, commissioners with District 15 and 20 have said they would withdraw their intent to leave Medic-One, with officials from all three member districts stating their primary interest remains to preserve the program and continue serving area residents.

As a personal statement, Pennington acknowledged he may have spoken too harshly of Wiltbank during recent discussions and said he wished to publicly apologize for doing so.

A special meeting of member districts as well as the interlocal board is expected to take place in the near future to bring resolution to financial concerns as well as discuss the hiring of an additional medic. A position within Medic-One had been vacated in January and, while applications have been received, Wiltbank said he did not feel confident in filling the position before the future of the interlocal could be made certain.

Interlocal Board members agreed hiring a medic was an urgent need and are expected to hold a special meeting along with member districts as schedules allow. Otherwise, the next Interlocal Board meeting is scheduled for June 18 at 7 p.m. at District 2 Headquarters. Those with questions or in need of accommodations may call (360) 864-2366.