Educate the youth to fight crime 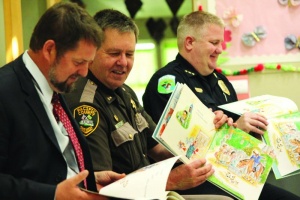 The roundtable panel held on May 6, at South Bends Early Learning Center brought together local law enforcement officers, Washington State legislators, educators and parents to introduce a National program that will provide youth the tools they need to be better prepared in life and hopefully steer them away from a life involved in crime.

The National program born out of Washington D.C. is a non-profit, bi-partisan organization lead by over 225 police chiefs, sheriffs, prosecutors and other law enforcement agencies in Washington State. Nationally there are 5,000 members. Washington State as well is one of nine states that have a dedicated office to manage the program.

Superintendent Morris opened the discussion welcoming everyone to a program that has been running for the last 3-4 years in Washington and is just now coming to the local area. Director Wells noted that the program was based on 40 years of research.

Fight Crime: Invest in Kids has proven to be one of the best ways to prevent crime and violence by giving kids the right start in life. The investment in high-quality early learning, voluntary home visits, after-school programs and school-based approaches to reduce bulling, aggression, substance and crime will also prove as an intervention platform for troubled youths. It has drawn National attention since 1996, boasts the description of the current program.

Sheriff Scot Johnson spoke about the support from law enforcement that he has seen.

“All 39 sheriffs are on board with the program. I have seen the reports of a study based on two groups of kids that received early learning and those that did not. They have shown that by the age of 27 the children that were not exposed to the early learning program committed crimes at a rate of five-times more than those who had the early learning.”

Prosecutor Burke added, “Kids that get off to a good start…we don’t see them in the criminal justice system. I have seen it in practice, and I have to deal with that. I am absolutely in favor of this program.”

In Washington State the program focuses on increasing funding and improving policies for high-quality early learning and home visitation programs. The program is supported by tax-deductible contributions from foundations, individuals and corporations. The Bill and Melinda Gates Foundation provide major funding into the Washington State program. The program receives no funding from federal, state or local governments.

“It will pay dividends down the road, the investment is a no brainer and it starts right here. I am very proud that we will be investing in Early Learning. I am really happy to see parents getting involved as well,” said Spoor.

Representative Blake spoke to how it is seen in some parts of the political arena.

“For politicians the pressure is about the next election. The voters need to hold us accountable when we talk about not making these investments. You do not see the outcomes in just a few years…they will be seen 15-20 years down the road.

Results from the program note that Fight Crime: Invest in Kids state that, in Washington State it has helped stabilize and increase funding for the early Childhood Education and Assistance Program and has played a major role in securing new state and federal funding for evidence-based voluntary home visiting. The program has changed the way the Nation looks at early learning programs by educating scores of opinion leaders and policy-makers.

Other comments came from the discussion back by years of observation in and around education, are happy to see a program like this and the hope it would be a program that would last and be given an opportunity to grow.

A common theme was that it better to invest now at an early age as opposed to have to bear the continued and growing expense of housing, feeding and maintenance of an increased prison population.

Additional discussion spoke to how other school programs have success when classrooms are can capitalize utilizing parents in the room. The student to teacher ratio can be increased, meaning that for a classroom of 24, having a teacher, teacher assistant and two parents in the room makes it the equivalent to 6-1. The need for parental involvement is essential for a successful program.

The discussion lasted for just over 30 minutes but the point of involving the target audience was just getting started. The panel broke down into two groups who then engaged three and four year old classes with a story.

The members of the panel took turns reading pages from the books as others held up the pictures for the kids to follow along. After the stories were finished a short question and answer period opened up for the kids to ask the law enforcement officers and political leaders any questions they might have. The three-year-olds went in for close inspection and were treated to a show and tell about handcuffs from Chief Spoor and Undersheriff Fosse.

Everybody left in smiles and adulation for the Early Learning Center in South Bend and the assurance that the program would be given it fair try.

“I see kids at the Early Learning center who can read better then kids I graduated with,” said Sheriff Johnson.