Dozens turn out for National Day of Service projects in Vader 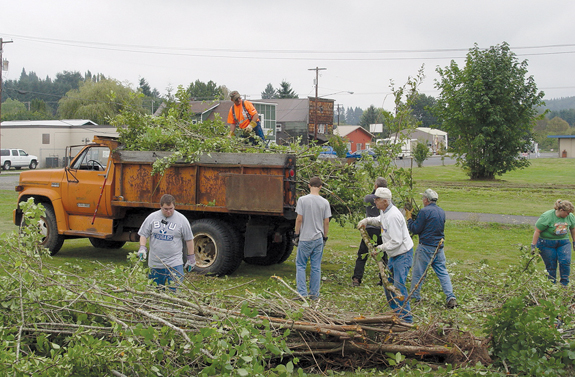 Volunteers with the Vader Assembly of God and Latter Day Saints church clear brush from an open lot in Vader Saturday as part of the National Day of Service program. Debris was hauled away in a dump truck provided by Larry House of Larry Sr. Hulk Hauling,

More than 60 volunteers from various churches spent Saturday morning painting, power washing, weed whacking and sprucing up the city of Vader in recognition of National Day of Service.

Part of projects going on around the country, as well as elsewhere in Lewis County, the National Day of Service was first established in 2002 by the Bush Administration as a way to commemorate those who fell in the line of duty while responding to the World Trade Center Attacks on Sept. 11, 2001. Participation in the event had been a first for Vader and Mayor Ken Smith, who was among those growing calluses that day, said he was "startled" to see so many individuals participating (65 in all).

Multiple public works projects were completed, including the painting of tables at Mc Murphy and Werden Parks, the pressure washing of City Hall, and the clearing of brush and debris from public and community property.

Among the volunteers were members of the Vader Assembly of God and the Latter Day Saints Church, which included members both local and regional. Members of local Catholic churches also volunteered to serve breakfast, prepared with food donated by Trans Alta.

All in all, close to 200 person hours were donated that day, with business such as Chehalis Rentals, Wal Mart and Home Depot contributing tools and materials as well.