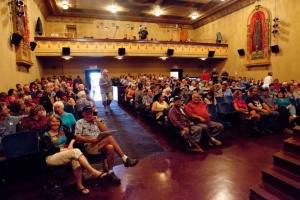 A full house of 335 people attended his final episode last month at the Raymond Theatre.

Cox talks with great enthusiasm about the project that consumed his time and energy for almost four years.  People in the Willapa Bay oyster industry get revved up, too, with great fondness toward Cox and favorite moments and memories from the making of the series.

The project culminated Aug. 31 when Cox premiered his final episode, a surprising eighth segment after what had begun, in 2009, as a projected single 30-minute video production. The premiere, held at the Raymond Theatre, drew an estimated 335 people including the area's oyster farmers, processors and others who came together to celebrate the project and, in turn, the industry.

For Cox, the long hours and hard work brought great satisfaction. “There’s a lot of achievement to this project on a personal level and on the industry level,” he said. “It’s the biggest project I’ve ever taken on, from capturing over 300 hours of new oystering footage and interviews as a one-person crew, to completing post-production on nearly seven hours of program time. I had to dig the deepest I've ever had to, to pull off the premiere, working 22 hours a day for weeks, as it took a determination to have this final chapter ready in time for the community to see it on the big screen."

He compares his work to that of his mother's parents, Dick and Martha Murfin and grandfather, Frank Turner who ran the Ilwaco Tribune for 50 years. “My mother (Maureen Hunsberger) ... would send me daily emails of inspiration building up to the premiere, reminding me of the deadline pressures my grandparents would go through weekly to put out the Tribune. Considering the fact this project was greatly inspired by their preservation efforts of local history through the newspaper, it was the perfect lift to keep me going."

And all of the effort was honored, as there were cheers, tears and a standing ovation following the premiere screening.

The people he came to know and admire found gratification in his work.

The screening was “amazing, for a couple of reasons,” according to Nick Jambor of Ekone Oysters. “First, he got so many of the industry together at one time. Secondly, seeing it on the big screen in the theater – that was Wow! This is really neat!”

Added to the “Wow!” factor was the fact that many of these folks don't normally get a chance to socialize with one another. “Some of these people we don't see for long periods of time,” Jambor said, “or we don't see them at all. And that was great, getting together.”

Pete Heckes of Heckes Oysters commented on that, too. “I'm kind of out here in the corner, here in Nahcotta, and a lot of those guys I don't really know.” He added that the series “gives people an idea of what's going on out here. It's a lot of hard work.”

Dave Nisbet of Goose Point Oysters noted that some “Come together for agency issues, with regards to farming or processing. But it was fun to come together to celebrate what we do as a group.”

Andi Shotwell of Elkhorn Oysters commented, “We have a really good relationship with each other. I consider them almost family. It was really neat to sit with everybody (at the premiere), to see everybody together like that,” she said.

Adding to the thrill of seeing themselves, their neighbors and their industry on a big screen, there was the sound of the audience at the screening. They laughed at and with each other, and applauded each other during some parts.

Beyond the screening, area oyster farmers and processors express gratitude toward Cox for capturing the ongoing drive within the industry to produce the best oysters possible.

“Overall, (the series) has been pretty positive,” Shotwell added, “and it has been interesting to see how other growers see things, how they run their farms. And I know from feedback I've heard that many people (consumers) don't understand how much work goes into oyster farming. This series will hopefully increase awareness of how much it takes, and how much pride we have in producing a high quality oyster for the consumer.”

That pride is evident in those interviewed for the series.

“One thing I remember saying is, the fun is in the farming,” Nisbet said. “That's what makes it enjoyable. Being able to grow a good healthy product is very satisfying.”

Kathleen Nisbet, the eldest of Dave's four daughters, shares her dad's enthusiasm for the work. “I grew up in the industry,” she said, “I was strapped into a car seat at 6 months old making deliveries of oysters to Portland. They taught me how to drive a skiff at age 8. I've been talking oysters at the dining table with my mom all my life. I've always been a part of it.”

Besides being involved in the family's oyster farming, Kathleen Nisbet now manages the family's processing plant on the Niawiakum River.

Everybody in the local industry helped Cox get the films and interviews he needed to make his documentaries, making some lasting memories for those who participated. “My son is one of the ones pulling the long lines out,” Jambor recalled. “That was fun to see. Keith captured that.”

The series, altogether, is a “snapshot of time,” Jambor said. “We all go out and work all the time but we don't often get a chance to look back at what we've done. He's done a fantastic job of capturing the industry.”

Some favorite moments were amusing as well. Andi Shotwell lost sight of Cox one time when he was on their boat. “We were moving transplants. I was running the boat and Steve (Shotwell) was running the crane. Keith was crawling along the narrow edge on the boat and bringing the mic back to me. One second I see him and the next second I don't see him at all. I'm hanging out the window of the boat, steering, and he's halfway out of the water, holding the mic out of the water, saying 'I'm OK, I'm OK!'  He was all smiles. He was a good sport about it, I'll say that.”

Kathleen Nisbet recalled a memory of navigating a skiff around one of their boats while Keith captured the process of picking up tubs of oysters.

“It was a lot of fun taking him out,” she laughed. “One time with the tide rolling us around, I was trying to drive the skiff and do an interview at the same time.  The spray was in our faces and we were rocking and rolling and trying to do everything.”

The series is both entertaining and educational, Jambor said. “If the films get a broader distribution, I think it'll do a lot of good for the industry as a whole. Also, it focused on some of our bigger issues like ocean acidification; people will learn a little about that”

Cox put it into these words: “Shellfish industries around the world are extremely important to every estuary on the planet. The series captures the importance of shellfish, not just to eat and consume, but for the health of the estuary.”

“Seems like what he did should be on Discovery or National Geographic,” said Heckes. “It was kind of a fun thing to do and I’m glad it turned out well. You gotta give Keith a lot of credit for doing it.”

Andi Shotwell summarized the local reactions: “I think Keith went way over and beyond what we even expected when he first went out with us. I can’t say enough about him. It just means a lot to us as farmers to have him out there, to film it, to be a part of it – it just means a lot.”

You can view the series at: www.WillapaBayDocs.com. A complete DVD set of the series will be available for purchase late this year.