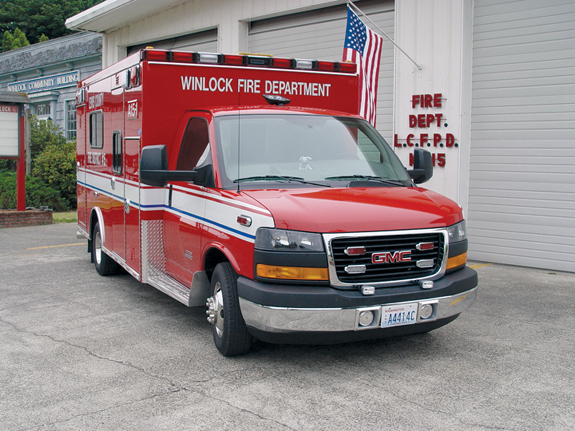 The new ambulance at Lewis County Fire District 15, in Winlock, which went into service Thursday. Its larger Patient Care Module can handle more patients and equipment.

Lewis County Fire District 15 has added a brand new ambulance to its fleet of EMS vehicles, and it’s capable of handling a greater number of patients at a time.

Based in Winlock, District 15 officials have spent the last year determining the appropriate style of ambulance and how to finance the endeavor, stated Assistant Chief Kevin Anderson.

Built by Braun Northwest, of Chehalis, the ambulance is crafted from a 2013 GMC G4500 and carries a six-liter Duramax diesel engine. But the biggest improvement over the district’s other vehicles is the larger Patient Care Module, which is 20 inches longer than before. Anderson said this allows for more equipment storage as well as the possibility to transport up to three patients, rather than two in previous vehicles.

"It’s going to be a great thing for us and for the community," said Anderson, stating the vehicle was built with "tremendous craftsmanship" by Braun, who were able to exceed original completion deadlines by three weeks.

The ambulance itself cost $161,855 and has been funded by a three-year loan through the state’s Local Option Capital Asset Lending program. Anderson said the loan will be paid back through an equipment replacement fund set aside in the district’s general operations budget and, at an interest rate of close to 0.68 percent, he said it’s almost like they haven’t taken out a loan at all.

This new ambulance has become the district’s primary EMS unit, after being officially put into service Thursday, rotating their 2002 unit to secondary and taking their 1993 unit out of service. Anderson said the fate of the older unit will eventually be determined by district officials and said it could be incorporated into a Support Services Battalion to help in larger emergency responses.