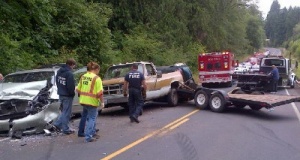 Emergency responders from Lewis County Fire District 2 and the Washington State Patrol respond to a wreck east of Toledo Thursday.

Motorcyclists injured after rear-end collision
A pair of motorcyclists were hospitalized after a collision with a classic car on SR 505 near Toledo Saturday, according to the Washington State Patrol.

The 32-year-old female driver of a 1928 Chevrolet Roadster had stopped to make a turn while southbound near Milepost 16 on SR 505, east of Toledo, when a 42-year-old Fife man driving a 2007 Yahama YZF-R1 struck the rear of the Roadster, causing minor damage to both vehicles. A 48-year-old Tacoma man driving a 2009 Kawasaki ZX-600 then struck the Yahama and both motorcyclists were transported to Providence Centralia Hospital with unspecified inujuries.

The driver of the Roadster and her 26-year-old male passenger, both of Toledo, were reportedly uninjured.

Pickup strikes elderly driver head-on
A Chehalis man has been charged following a head-on collision on SR 505 near Toledo Thursday, according to the Washington State Patrol.

Daniel W. Fultz, 49, has been charged with negligent driving after his 1984 GMC pickup lost control while hauling a car on a flatbed trailer near Milepost 7 on SR 505, east of Toledo. The trailer reportedly began to fishtail and the GMC crossed into the oncoming lane, striking a 2007 Toyota Sienna occupied by a 73-year-old woman from Port Charlotte, Fla., and a 76-year-old man from Worchester, Mass.

Fultz and the man in the Sienna were described as injured, though neither were transported to medical facilities. Both vehicles were totaled.

Vancouver family in I-5 rollover near Winlock
Three Vancouver residents were involved in a rollover collision on I-5 near Winlock Sunday, according to the Washington State Patrol.

The vehicle was totaled and the 20-year-old was transported to Providence Centralia Hospital.