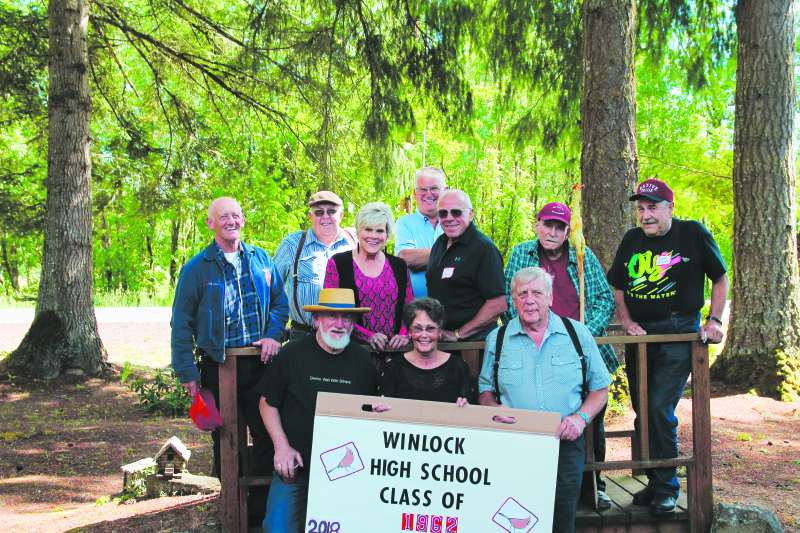 On Egg Day weekend there are usually a few class reunions and this year was no exception. The classes of 1960 - 1964 met together at the home of David Mickelsen in Toledo. This class had a lot of reminiscing to do since they are a close-knit group of friends and love to have fun!

Upon arrival, the first person to come and say "hello" was Sam Zion, who graduated in 1962. Sam stated, "The class of 1962 had 42 sisters and brothers." Denny Mickelsen, a graduate of 1962 responded to Sam, "and they were all tarred and feathered and pushed off the cliff." This was just the beginning of the fun!

Pam Spencer from the class of 1962 said it best "Oh my Gosh! I have been looking forward to this for months. We were a tight family, always together." Larry Sharp, a graduate of 1964, stated, "I've been here the past two years and it's the best (reunion) I've seen."

Mike Stultz, a 1961 graduate, jokingly stated, "What I think of today you can't print. They all got old but me!" Mike is the son of legendary Winlock football coach Dick Stultz.

Larry Mickelson was the only one in attendance from the class of 1960 and said he was surprised that "I am the only one here." Sue Mickelsen Lindeman stated, "It was a beautiful day! Our classes enjoy each other. Ronnie Smith then stated "I think it's great! Class reunions are great! We have classmates that live locally that don't come and we would love to see them too."

This class reunion was fun! Seeing former and current residents of Lewis County and laughing the afternoon away. This is a close group of people and it shows!

Thank you for inviting this 1981 graduate to your wonderful class reunion.