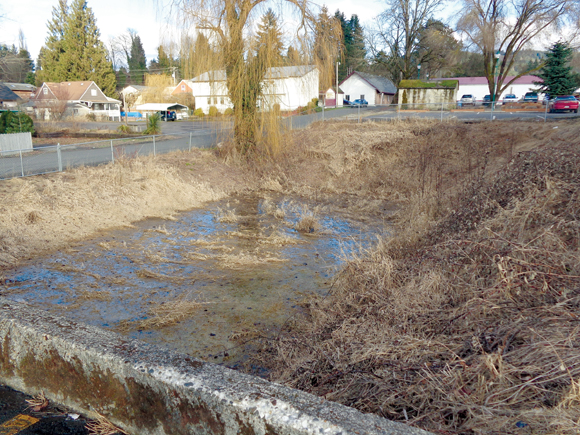 A storm water retention pond locally referred to as Jackson Hole in Castle Rock, where officials hope to create a small wildlife habitat during April and May. In the background is the park by the historic city jail, which was similarly improved last year.

Castle Rock is hoping to undertake an ambitious beautification project in the coming months as they turn their ongoing city improvement efforts toward a large storm water retention pond in the middle of town.

Known locally as Jackson Hole, the grass-filled pond is situated on Jackson St. between Cascade Select Market and the Castle Rock Post Office, and is the final destination for runoff collected through the city’s storm water system.

“This is our third year of taking a look at that wondering…how we can enhance it and make a really beautiful part of what Castle Rock has turned into,” said community activist Nancy Chennault to the Castle Rock City Council during a presentation at their Feb. 10 meeting.

Chennault and Public Works Superintendent Dave Vorse have been working to improve the city through beautification projects in recent years and have successfully completed the water feature outside City Hall in 2012, and improvements to the park outside the historic city jail in 2013.

Their newest undertaking has involved reaching out to students at Castle Rock High School, who have brainstormed what the retention pond could become both as a fixture within the community and an opportunity for education.

“Those kids worked really hard on putting the ideas together of what they’d like to see,” said Chennault, who said she and the city have been working with students from instructor Ryan Penner’s biology classes and science club.

Among the ideas put forward has been to turn the retention pond into a wildlife habitat, with birdhouses, bat-houses, logs for amphibians to live under, as well as decorative flora naturally found in such areas. Chennault said many of the plants for the project have already been acquired and only need to be planted.

In addition to natural improvements, plaques describing the plants and animals found within, as well as the function of the retention pond itself, are planned to be displayed within the habitat.

“It’s an educational piece,” said Vorse, adding, “hopefully it’ll answer a lot of questions that we get of, ‘Why do you have that big hole in the ground over there?’”

While the intention is for the project to be completed by Cleanup Day on May 3, a great deal of work is expected to be done beforehand with the help of AmeriCorps, whom Chennault said approached the city to solicit ideas for local community service projects.

“Starting in April, they plan on coming up and removing some of those grasses that are not beneficial, and to start putting in the large wooden stumps,” said Vorse of the AmeriCorps volunteers, stating they plan on coming down April 12 for a large-scale work party. “They’re bringing a crew of somewhere between 50 and 70 people up for the day—for a whole day—to help give us a good start.”

Chennault added the AmeriCorps volunteers plan to assist with artistic efforts for the signs, as well as a mural on the south wall of the pond depicting the wildlife living underneath the water.

“They have some artists among them,” she said.

When completed, the retention pond is expected to remain off limits to pedestrian traffic, but will remain accessible as far as the current fence line. And Chennault added the concepts put forward are not by any means set in stone, and hopefully serve as a jumping off point for others in the community inspired to participate.

“These are just basically some ideas to get that creativity moving,” she said. 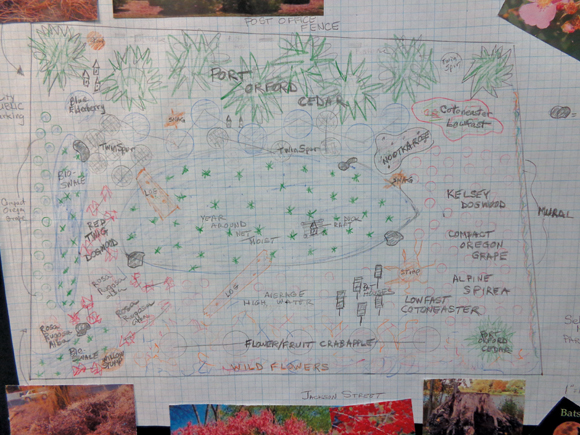 A conceptual rendering by community activist Nancy Chennault of what the improved retention pond could look like, created with suggestions by students from Castle Rock High School.