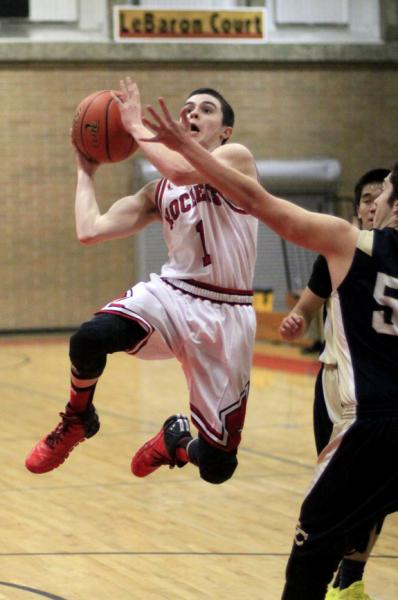 Junior Ty Johnson and his brother Brock had a difficult time shooting on Friday against Seton Catholic but in this instance, Johnson slashed for a bucket.

After a nearly flawless first half and a hot shooting display by Brock Johnson, Castle Rock Head Basketball Coach Kevin Johnson was feeling pretty good about his team's position in the A Trico League after Tuesday's convincing 54-34 victory over Toledo.

"I don't think our record is indicative of how well we have played," said the coach. "I am telling you—our schedule has been brutal. We played Naches (Valley) and they are a state tournament level team. We played LaSalle at the (Yakima) Sundome and lost both of those.  We also lost to La Center, Woodland and Kalama, so there is not a lot of shame in that. I was looking up some numbers and we have five losses against teams that are 148 and 5."

The Rockets played like a state tournament caliber team on Tuesday against a shorthanded Toledo squad. Missing from the Indian line-up was floor general and second leading scorer Brent Wood.Even Wood's presence on this night may not have made the difference against a Rocket team that probably pieced together the best 16 minutes of the season in the first half while jumping out to a 31-17 halftime advantage.

CR extended their lead by outscoring Toledo 14-8 before the Rockets put it into cruise control in the 4th quarter.

"I thought our kids played real well," said Coach Johnson. "It is not like we put a bunch of points on the board, but I thought we guarded well. We didn't give a lot of easy baskets. For us as a young team, that has been the biggest thing for us.”

On the inside it was Mason Klingberg who seemed to range freely around screens and curl routes and posted a number of early baskets. It was the hot hand of front man Brock Johnson, a sophomore who stunned the Toledo faithful at Murdoch Gym with 16 first half points. Johnson finished the game with 26 points while Klingberg added 19 and led his team in rebounding.

The Rocket depth was hampered a little by sickness and injuries, but Toledo fans didn't see that part of the Castle Rock program on Tuesday.

“We really have three guys that are experienced and do a lot of the scoring," said Coach Johnson.

Both Klingberg and Johnson admitted that they had achieved some rarefied air with a defeat of Toledo in their own gym.

"Our coach has been telling us this is the first time since he has been coaching (at Castle Rock) that we beat them (Toledo) in their gym," said Klingberg.

“I have been a manger for a few years and we haven't won here," said Sophomore Brock Johnson. "It feels really good. They definitely play hard and they never give up. You got to give credit to them but we really ran our sets well tonight. We were just making shots."

On Friday night, the Rockets jumped out to a big 28-13 lead over Seton Catholic, but the Cougars played hard in the second half and unlike Tuesday, the Rocket shooters were not hitting much of anything from beyond the arc in their own gym. The workhorse Klingberg scored 24 points while Brock Johnson had to score 13 points in creative ways by slashing and collecting fouls.

Half way through the season, the Rockets are in the thick of the Trico League race and Coach Johnson has a plan for the rest of the season.

"Basketball is ultimately a pretty simple game," he said. "Try to get easy ones and try not to give easy ones up.  If you do that, you are going to come out on the right end most of the time."