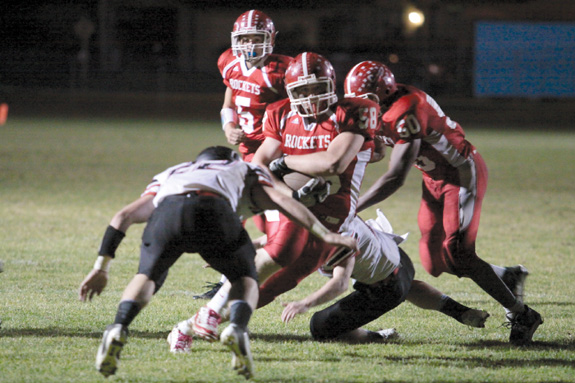 Castle Rock Senior Joe Merrill (#58) has played on the offensive and defensive lines, center and now full back for the Rockets.  On Friday night he crossed into the end zone for his first touchdown of his high school career during a 24-13 victory over rival Toledo.

It seemed almost poetic that seniors, something Castle Rock Head Coach Ben Suhrbier said loud and clear he had few of, were what the Rockets needed in a 24-13 season-ending Trico League victory over Toledo on Friday night.

The Rockets opened the game with a big drive right down the field helped by a long, long by Tanner Catlin.  To finish the drive, QB Mason Klingberg found Senior Nate Williamson in the right side of the end zone with a five-yard pass.

Williamson had a yeoman’s night this evening, but was overshadowed by his 18 carries for 40 yards.  The Indians found a way to slow him, but the Rockets found other ways to zip up and down the field.

One of the biggest surprises was senior Joe Merrill.  A lineman, both offensive and defensive, Merrill has a big strong body that Suhrbier has found ways to plug in to the team’s advantage.  Indian defenders were surprised to find him barreling at them in the second quarter.  In the third quarter however, the Rockets used Merrill like a pile driver.  He carried the ball seven times in a row, at one point for 27 yards, including three attempts to get the final yard and break into the end zone.

“Merrill is a great kid,” said Suhrbier. “We have him as an all league-player.”

Another Rocket that may go down as all-league inspirational is senior Darren Ayoub.  A basketball injury and subsequent surgery left him less than 100% early this season.  He worked hard to come back to his position at tight end, but eventually found himself playing on the defensive line.

“We just needed some more athletic bodies on the defensive line,” said Suhrbier.

It was a good thing.  Toledo was not going away quietly.  The Indians threatened to answer Shawn Godinho’s 23-yard pass reception with a long scoring drive of their own just before halftime. A torturous sack of Toledo QB Gage McDill by Ayoub all but ended their drive.

“Nothing was different about that play on McDill,” explained Ayoub.  “It was a key third down stop, and I was just trying to get the crowd and other players excited. Suhrbier has always enjoyed seeing my love for the game.”

Ayoub was not finished there.  After a Rocket drive sputtered, he kicked a 32-yard field goal for the Rocket’s final three points.

Perhaps the prettiest play of the night belonged to Toledo junior Mason Gaul, who reached high for a finger-tip grab and then found open field for a 58-yard touchdown catch with 2:46 to go in the third quarter, making the score 24-13.

It was time for the boys in red to get tough and they did.

After Ayoub’s field goal in the fourth quarter, the Indians took the ball the length of the field and threatened to make the game very interesting.  Castle Rock’s defense won the day with a 4th and one stop on the one yard line with 4:50 to go in the game.

The season is over for both teams.  Toledo finished the season with a 3-6 record while CR was 4-5.