Freshly-blooming dahlias at Cowlitz River Dahlias and Succulents, where gardeners can pick up grown plants or tubers to start from scratch. Owner Theresa Bergman said, thanks to Bloomin' Tour, area growers have a chance to showcase their products they may not have otherwise.

Begun in 2012 by gardening trio Nancy Chennault, Theresa Bergman and Bill Davis, Bloomin' Tour was started as a way to promote agri-tourism among the many growers of flowers, fruits, trees, shrubs and other products, with the number of participants continuing to increase.

"Every year we try to have somebody new," said Chennault, who has retired from a career in the horticulture industry but continues to grow and sell plants from her home, known officially as The Gardens at Sandy Bend, as well as test out different varieties to see how well they would live under average--and sometimes adverse--home garden conditions.

Chennault said one of the goals of Bloomin' Tour is to help educate guests about the many aspects of horticulture, adding the many businesses involved each bring something different to the table.

"We all have different things that we specialize in," she said.

Among the participants this year were founding members Cowlitz River Dahlias and Succulents, owned by Bergman, Castle Rock Lavender, owned by Davis, as well as yearly participants Castle Rock Nursery and The Gardens at Still Meadows, and newcomers Harmony Winery Garden. Guests were also encouraged to visit Downtown Castle Rock, where many public floral displays have been installed in recent years to beautify the town, catching the eye both of local residents and America in Bloom judges.

Thursday was said to have been rather slow as the rain kept many people inside, but Friday through Sunday continued to be very sunny, with Mt. Mania bringing a number of people into Castle Rock who could then take time to visit the Bloomin' Tour sites.

Chennault said being able to hold the Bloomin' Tour on Mt. Mania weekend was simply coincidence and the day on which Bloomin' Tour is held typically is worked out among those participating and the best time of year for them.

To have your garden or business included in next year's Bloomin' Tour, as well as to participate in many other community projects meant to improve the town, call Chennault at (360) 703-8174, or look for Bloomin' Tour on Facebook. 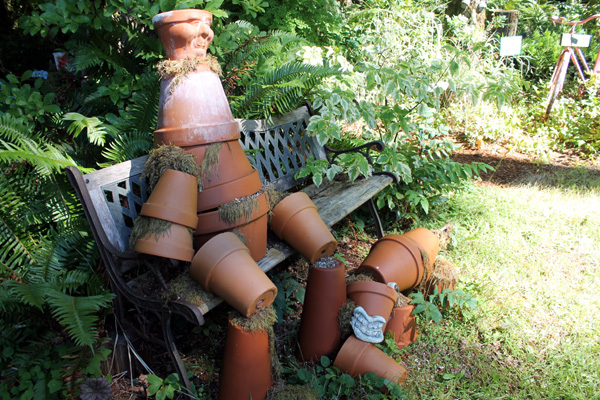 A terra cotta man and his dog sitting on a park bench at The Gardens at Sandy Bend, which owner Nancy Chennault had built with the help of her grandson. Chennault's garden included many winding pathways and was full of planters used for decoration, as well as pieces of decoration used as planters.

One of multiple water features at The Gardens at Still Meadows, which features both free garden tours as well as retreat center services, which include massage therapy and water therapy, as well as a gift shop.

Budding grapes at Harmony Winery Garden, a new addition to the Bloomin' Tour this week. Owners Les and Deann Murphy opened their home garden to guests, which contained samples of the grapes grown at their local vineyard.

A row of lavender plants at Castle Rock Lavender, where guests can buy these aromatic flowers by the bundle, or cut their own, as well as choose from a variety of lavender-scented products.

A large number of flowers, shrubs and trees were available at Castle Rock Nursery, which sells a variety of plants year round and tends to specialize in tropical varieties such as angel trumpets, birds of paradise, and banana plants.

A raised bed of flowers outside Castle Rock's historic city jail are among a number of such features located throughout Downtown Castle Rock that have been added during recent years as community organizers push to beautify the town.