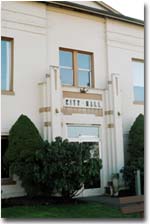 After the official role call set the Castle Rock meeting into order, the council members quickly dove into the night's agenda.

Almost immediately after the start, the attention was quickly turned to Teresa Walker representing the Washington State Department of Health, Office of Drinking Water. "The reason I'm here today is to present an award to the water treatment plant," Walker told the council. "The Castle Rock plant has met these optimization goals for a consecutive three years." As Walker continued, she explained to the council how important it is that the town has this great water system and she read the letter that comes with the plaque she awarded to the city.

Moving from this presentation, the council turned to business from the floor. At this time a man rose with a question about getting another loan for the water bill. The council notified him that one of the filters had a leak that they needed a loan to be approved so that it could be fixed. It was then brought up how lucky Castle Rock was to have multiple sources of water, unlike Winlock with the current oil spill having contaminated the water. Along with this, the city has been examining the water levels for the fish runs. The man then asked how much more money the loan would be. Ryana Covington, the city clerk, notified him that that topic would probably be addressed at the pre-budget workshop next Monday. "It's about $17,000 a year for payment on that loan for ten years for principle and interest." Covington told the council.

Before moving any further into the agenda, Mayor Helenberg spoke up, "I would like to just take a moment of silence. We lost a long time city council member that was on the council for 16 years, last week, Mr. Rhylan, and then for the three fire fighters we lost over in Eastern Washington." After this announcement, the room entered the moment of silence for these lost men.

After the silence, the council moved straight into department reports. With no reports from the City Attorney and the Police Chief, the attention was given to Public Works Director, Dave Vorse. In his report, Director Vorse gave an update on the chip seal completion. He reported that they were able to complete all sites but one, due to digging they would have to perform on sewage along that area, which they wouldn't want to dig up after a chip sealant. "That will be postponed until next year." Vorse told the council. Following this update was another update about the Fourth Avenue water main replacement. In this report, Vorse reported that they had about 800 feet in place and by the middle of September, all the pieces should be in place. Next, Vorse brought up to the council the "overview and approval to submit four Transportation Improvement Board grant applications." Vorse continued that should they be awarded these grants, there were many areas in the city they would use the money to prepare. In this report, he had attached maps showing the areas throughout town that could and would be fixed and reported that sometime in November they would be notified if they were awarded the money. With the closing of this report, City Engineer, Mike Johnson started his report. As Johnson started his report, he introduced Dominic Miller to the council. "He is going to be taking over for me." Johnson told the council as he referred to his moving to another office.

With no further reports from Johnson, City Clerk, Ryana Covington began her July Cash Report. In the packet given to the council, Covington attached papers containing the various investments from 2014 and 2015 for comparison of the cash going in and out of the city. Covington also told that this would be more useful at Monday's budget workshop meeting at 6:30 in the Senior Center. Covington also reported to the council that there were three funds they still had deficits to which are: "Street Fund, The Street Construction Capital Fund as well as the Municipal Water Capital Improvement." She told the council that the Bond Council Contract has been signed and will be sent to the rural developments. They would be able to get funds late September, early October. After the closing of Covington's reports, Librarian Vicki Selander told the council that the library had passed with over 200 "yes" votes.

Next on the agenda were the Council and AD HOC Committee Reports. With this, Nancy Chennault, the representative of Cowlitz Economic Development Council gave an announcement that they had brought a new woman on board as the Public Program Communications Director. Chennault said that she felt confident with her previous background and believed she will be great for this job and hopes that she will be able to introduce herself at the chamber meeting on the second Thursday of September. Chennault also reported that this time of year is hard for America in Bloom due to the "temperatures and dryness." She also notified the council that the Far West Show was coming up and people would be "in Castle Rock to see how we treat their project and how we represent them."

As she thanked the council, she returned to her seat.

After the approval of minutes from August 10, the council began the old business items. First on the agenda was the approval for a second reading of Ordinance No. 2015-07, an ordinance adopting policy for city credit card use by employees and city officials. Following this was the "cost estimate for recreation signage for the bike skills park, boat launch, Riverfront Trail and North County Sports Complex." As the council listened to the ideas of the various areas and looks of the signs, the cost estimate was about $940 for the materials needed. All the signs plus labor would be around $1500 to $1600.The council then agreed to discuss this topic further in the budget time. Next on the list was the "Exit 49 Pedestrian Improvement Project update and recommendation." It was brought to the council's attention that no available funding was found to be available this fall. The recommendation that was given to the council was to "reject the current bids" and seek out others early next year. Following the recommendation, the council moved to reject current bids until a later date. Last on the list of old business was the "request to amend the Park budget in the amount of $5,000 to fund an update to the city's Park Plan." With this, the mayor favored the idea to "finance this $5000." With no opposition the motion carried.

Moving into new business, the first agenda item was the "approval of final progress Estimate No. 4 and acceptance of this project as being complete, including release of retainage bond for Lakeside Industries for the city-wide overlay project, pending approval by lending agencies. With a movement made to approve the finishes to the overlay project and no opposition, the motion carried.

Following this was Gordon Huggins and his request to hold a POW/MIA Remembrance Day Ceremony on September 8 at 11 am in the "east side city parking lot." With much support from the council, the motion to approve, carried. Huggins also requested council consideration to approve issuance of a parking permit at the boat launch for qualified disabled veterans who don't own a boat or trailer." With this, Huggins made the point that some veterans couldn't make the long walk to the boat launch versus just parking down there. The council brought forth the fact that if the free permits were handed out that there may be an overflow of parking in the limited area offered at the boat launch. While the council liked the idea of giving free parking to the veterans, they knew they couldn't do this with the very limited parking available and the amount of money the city would be losing. As the council continued discussion, the council members agreed that is wasn't fair to the brave veterans who have served; therefore, they tabled the discussion until the next meeting in hopes that they will be able to find a good solution for both sides.

The fifth item on the agenda was the "review and consideration to approve; proposed Clerical Collective Bargaining Agreement." As the council reviewed the contract, the motion to approve this carried and would come into effect January 1, 2016.

Last on the list was Chris Balderee who "requests approval of an adjustment to their utility bill due to leak in the amount of $616.00 in accordance with Castle Rock Municipal Code." Once the council reviewed the contents of the packet they moved to approve the adjustment. With no one to oppose, the meeting was adjourned until the next meeting on September 14.