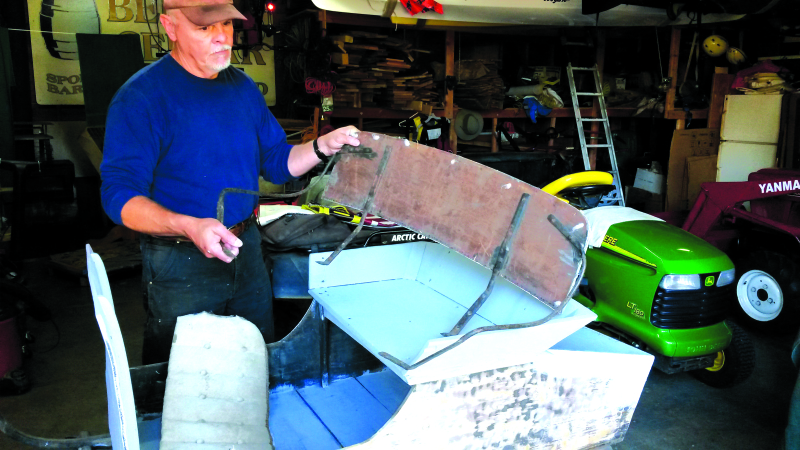 Photo by Laurie Bowman - Museum Curator, Jerry Bowman, recently completed a full body restoration of this historic little sleigh. The sleigh's body was disassembled from the runners. Numerous bolts were cut off and eventually replaced. The dash and floo

The Northwest Carriage Museum in Raymond has just recently added another historic piece to their collection, a box sleigh from Maine circa 1890's. The sleigh was donated to the museum, and actually had the original maker's tag on it. The tag indicated that the sleigh was made by G. W. Fisher in Machias, Maine. Museum Curator Jerry Bowman did a full-body restoration on the sleigh. Bowman even did some in depth research on the company that made the sleigh, finding that the company was owned and founded by George William Fisher, who was born in Machias, Maine in 1851, and was a blacksmith as well as a carriage maker.

It's been a good year for the Carriage Museum and the museum shows no signs of slowing down now. The museum has expanded as of April in 2015, and added a barn to the building. The museum continues to grow, "when we built it, we wanted to use all local labor so not only did we go out and get a lot of money to bring into the community but we sourced locally. We're really proud of that, that we brought that sort of economic value to the community. Now what's even of greater importance is that because of the barn, and our signage and things we're bringing in more people," said Bowman. Bowman sites that on an average year the museum would draw around 2,000 people. This year they pushed 7,000, and Bowman says his goal is to add to that number by a couple thousand next year.

The Carriage Museum is one of the only destination points in Raymond, and 80% of the people that come to the museum come from 50 miles or more away. So they're coming just for the museum and of the 80%, 65% of those people have indicated that they are spending the night in our area. "If they're coming from 50 miles or more away, they're going to eat in our restaurants, they're going to buy our gas, shop at our grocery stores. It's great that people come to see the museum, but then that spreads into the community," said Bowman.