Cardinals fight hard against the Trojans 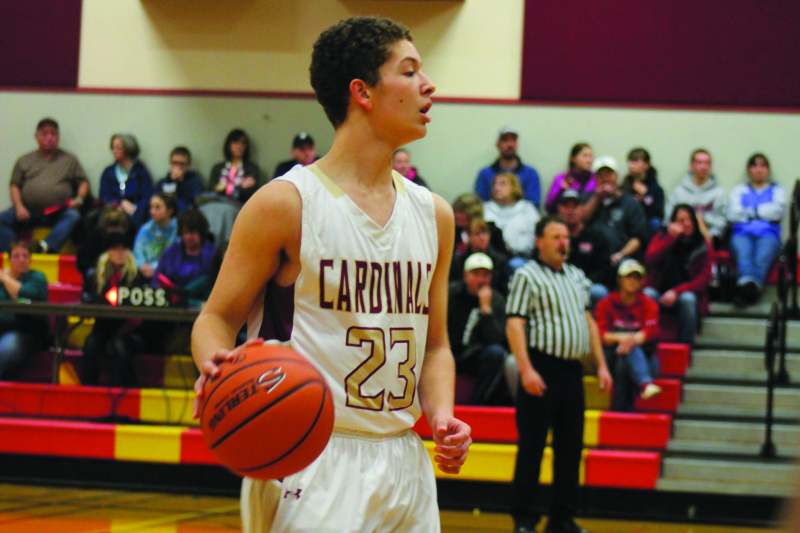 Photo by Kennedi Collins - Nick Patching takes the ball around the key as he looks for a clear shot.

Just a few days before Christmas the Pe Ell Trojans traveled to the home of the Winlock Cardinals. As the teams came to the court both teams wanted a great win before the Christmas season. While both teams desired this end result both knew that only one of them would leave with the win.

For the start of the game the Trojans got the tip off into their advantage and the game could officially begin. Pe Ell continued to score the first two points of the game but were quickly greeted with four points from Winlock's Dawson Hall and Wyatt Dean. With these points Winlock was able to hold the lead for a bit until Pe Ell scored seven back to back points. The first quarter ended with the Trojans leading the score at nine to four.

As the second quarter started Pe Ell scored another two points. Wyatt Dean quickly showed the Trojans that the Cardinals meant business when he shot a great three pointer. Although this was great play for the Cardinals the Trojans came back with two points. As the quarter continued Nick Patching, Adair Garibay, and Wyatt Dean added more to their score. Following those plays and a three pointer from Pe Ell the quarter concluded with Pe Ell in the lead with 19 to 13.

Following the halftime and Christmas themed cheer routine the second half of the game could begin. Pe Ell continued their tough playing and increased their score count. Nick Patching from Winlock sent Pe Ell a message with two three pointers Dawson Hall's free throws. The quarter continued in back to back plays between Pe Ell and multiple plays by Dawson Hall and a three pointer from Nick Patching as they brought Winlock's score up. As Pe Ell scored one more three pointer before the end of the quarter the quarter ended with Pe Ell leading by two points with 32 to 30.

The time had come for the final quarter and the last chance for the Cardinals to take the game for a win. At the start Dawson Hall made both free throws to tie up the game. Immediately after these two points the Cardinals and the Trojans went into a series of back to back point making. The game continued to stay tied until Pe Ell received free throws from a foul. In response to these points Wyatt Dean scored another two for the Cardinals and returned the game to a tie. After this great play the Winlock crowd bellowed with anger after a bad call was called against Winlock. This call gave free throws to Pe Ell that were successful.

Following this the teams seemed to reach a stalemate until Nick Patching scored two points for the Cardinals. Although the Cardinals had battled so hard the game ended with a victory for Pe Ell. The final score was 45 to 41.

The Cardinals next game will take place on January 5 at 7 pm in Mossyrock.