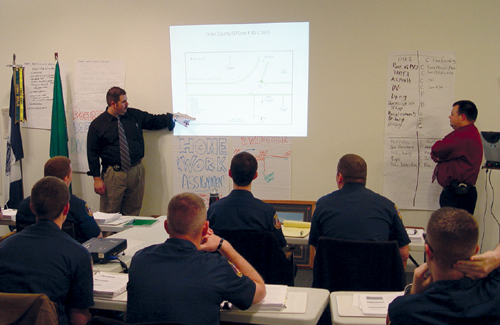 Detectives Bruce Kimsey (background left) and Dusty Breen (background right) of the Lewis County Sheriff’s Office explain the finer points of diagramming a crime scene to Police Academy Cadets in Winlock Thursday night. The presentation was part of ongoing academy curriculum, and included the ins and outs of processing the scenes of violent crimes. As an example, Kimsey and Breen discussed the murder of Austin King near Mossyrock in 2010, to which Jack Silverthorne pleaded guilty in 2011. King’s body had been found down a steep embankment a month after the murder, and Kimsey and Breen discussed the difficulties presented when processing a heavily-decomposed body. They also used the more recent of murder of Terry Vance in 2012, who was admittedly slain by son Joshua Vance. Kimsey and Breen used diagrams presented in court to show the path Joshua Vance took out of the house using blood splatter found at the scene, stating the diagram was able to represent individual drops of blood found by investigators. 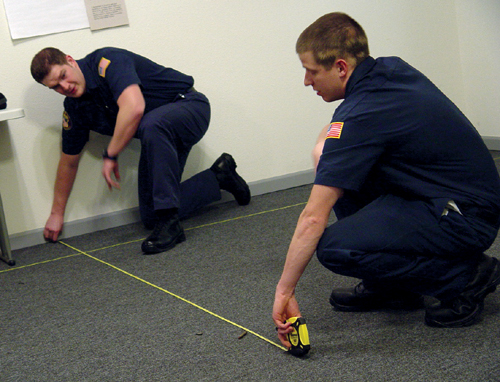 Cadets Sam Schouten (left), of the Lewis County Sheriff’s Office, and Neil Seifert (right), of the Winlock Police Department, determine the coordinates of evidence placed by Breen in a mock exercise. Cadets were instructed to use fixed points within the room (objects and structures unlikely to move) as a baseline when determining an object’s location, so a subsequent diagram can be composed accurately and to scale. When processing a scene outdoors, cadets were told to use trees or to bring metal rods to place in the ground, so investigators can return to the scene even months or years later with a metal detector to learn additional information about the crime. A .22 caliber round placed as evidence during the mock exercise. Instructors said evidence such as cigarette butts, shoeprints, broken glass, loose fibers and fluids must all be documented when processing a crime scene, as their location and relation to other pieces of evidence can have a strong bearing on the outcome of a case. 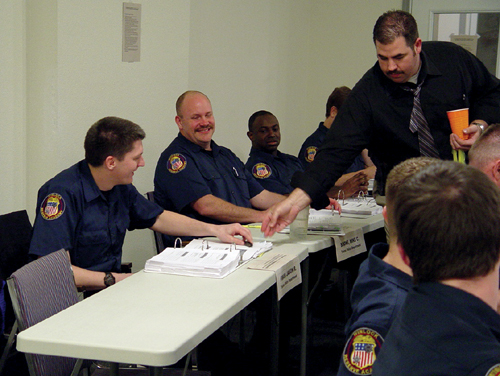 Kimsey (far right) hands a raffle prize to cadet Jason Fiman (far left), of the Tenino Police Department—one of the many displays of levity throughout the night. Kimsey said individuals who investigate such serious crimes as rape and murder for a living need to keep a sense of humor about them to manage the emotional and psychological demands of their job.