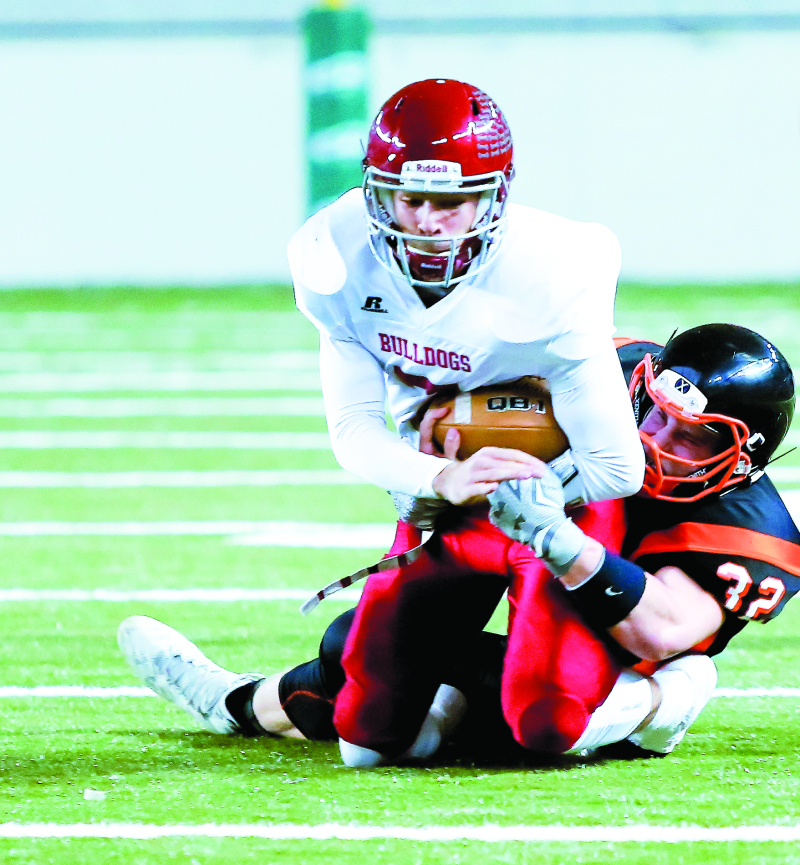 For the second straight Class 2B State Championship game, Okanogan broke Napavine's hearts - this time 36-34 - at the Tacoma Dome Saturday. The defending champion Bulldogs erased a 27-14 third quarter lead with the winning touchdown coming under three minutes to play.

Like all true champions, Okanogan (13-1) executed when it had to in order to seal the victory.

The Tigers (11-3) never could really stop the Bulldogs' ground game, and for that matter, Okanogan could not put a halt to Napavine's passing attack. Okanogan netted 250 yards rushing on 5.2 yards per carry. Meanwhile Napavine grounded out only 85 yards running the ball at 2.7 ypc.
Napavine's Wyatt Stanley (82 yds rushing) completed 18 of 27 passes for 282 yards, 4 touchdowns with 1 interception. Okanogan's Clay Ashworth (133 yds rushing) completed 10 of 18 for 173 yds, 3 TDs with 1 INT.

Napavine jumped out to a 7-0 lead on a 34-yard pass playing from quarterback Stanley to wideout Jordan Purvis, who beat his defender on a "go" pattern with 4:09 left in the first quarter. The Tigers drove 83 yards in a dozen plays. Stanley completed a couple of 13 yarders and made a nice 17-yard run on the possession.

The Tigers got the ball on a fumble recovery at their own 17-yard line.

The Tigers came right back after holding the Bulldogs on downs. The Orange & Black drove 70 yards in 7 plays while scoring midway through the second stanza on a 5-yard pass from Stanley to Chase Van wyck (12 solo tackles). Austin Filley's extra point made the score 14-7.

Okanogan knotted it again on a 10-play, 55-yd march, culminating on a 3-yd pass from Ashworth to Riley Prescott on a "down-and-out" pattern with 3:20 left until halftime. The first half fireworks didn't stop there. Napavine responded by going 74 yards in 9 plays. Stanley hooked up with Mac Fagerness (7 catches, 153 yds) on a perfectly executed screen play with 29 seconds left in the half. Filley missed the kick but NHS still led 20-14 at halftime.

Things progressed well for Napavine at the start of the second half. The Tigers chewed up half the quarter by taking the pigskin 65 yards in 11 plays with Stanley pushing the ball over from the 1-yard line. Napavine was on its way to a State title with a 27-14 edge.

The Bulldogs moved the ball to the NHS 17 where they surrendered the ball over on downs. On 4th-and-7 at the 20, an all-out rush by Okanogan resulted in a safety with 2:15 to play in the third panel when the snap sailed through the end zone.

The Bulldogs drew to within 27-22 on a 3-yard run by Greyson Fields after setting up shop at the NHS 35 following a 16-yd return. On a key 3rd-and-14, Ashworth completed a 15-yard pass to Prescott to the NHS 24. It took OHS 9 plays to score. Ashworth was stopped on the 2-point conversion run. But there was plenty of time left with 10:26 on the scoreboard.

Three plays later, Napavine was forced to punt and Okanogan was in business with another short landscape at midfield. On 2nd-and-6, Ashworth aired-it-out to a wide open Mason Guerette. Ashworth passed to Guerette for the 2-pointer and OHS was in front 30-27. There was still 8:34 left in this contest.

Aided by a pass interference penalty and a holding call, Napavine scored quickly - perhaps too quickly - with a 4 play, 65-yard drive. On 2nd-and-7 at the OHS 31, Stanley completed an aerial to Fagerness (INT) with 6:16 to play. Filley's PAT shot the Tigers in front 34-30.

Prescott returned the ensuing kickoff 28 yards to the Napavine 49. And, once again the powerful Bulldog offense had a short field to work with. Okanogan gained huge chunks of yardage on running plays. Ashworth gained 9 and 11, and Prescott had an 11-yard burst. On the eighth play of the march, Fields plunged in from the 1. Stanley blocked the PAT. Napavine would have one more chance with 2:56 to go. Stanley passed to Noah Lantz for 13 yards, but on 2nd-an-7 at the NHS 41, Stanley's pass was intercepted by Payton Staggs at the OHS 36.