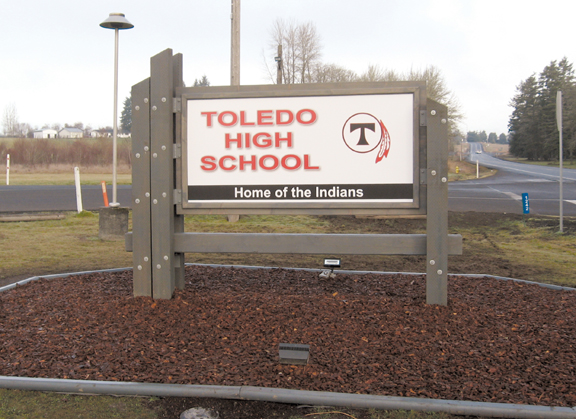 The new sign placed at the entrance to Toledo High School, constructed as an Eagle Scout project by local scout Corbin Mansker. The sign, built since the summer and installed during Winter Break, is expected to last around 35 years, while the less-durable vinyl sign inside can easily be replaced when necessary.

Toledo High School has a brand new sign at its entrance thanks to the efforts of volunteers and Boy Scouts helping Life Scout Corbin Mansker complete his Eagle Scout project over the break.

Mansker, of Troop 373, in Chehalis, lives locally and says he will be attending Toledo High School as a freshman starting next year. He said the idea to build a new sign for the school was inspired by signage installed at nearby Lewis and Clark State Park, and that such a project falls in line with his desire to someday become a civil engineer.

Mansker’s efforts gained steam during Cheese Days when he began to heavily fundraise, while also acquiring the help of area businesses for services and supplies, such as Palmer Lumber, Home Depot, Vancouver Bolt Supply, Pro Graphics, and Farmer’s Insurance. The School District itself also pitched in and purchased the building permits for the sign, as well as showing a great deal of support for Mansker’s efforts.

“Over the summer we hit it pretty hard,” said Mansker of the project, which involved fabricating the sign in his garage with the help of fellow scouts.

He said about 70 hours were spent building the sign, which he estimated to weigh around 1,000 lbs when it was done. He said these hours of the project were carefully logged to as to keep track of progress as well as to prepare for his actual Eagle Scout Application.

“Document everything,” he said as advice to those also undertaking Eagle projects. “There’s a lot of paperwork after this.”

During the installation itself on Dec. 28, around a dozen volunteers were on hand to hoist the sign into place and pour its foundation, hoping to have it on display by the time school began Jan. 6.

A small excavator had been brought to lift the sign, all half-a-ton of it, but efforts even to lift it entirely off the ground were failing, as the excavator was just barely tall enough, and a metal support bar was beginning to buckle under the weight.

A resident right across the street from the project observed the scouts’ struggles and came over and asked if he should call his brother to come help, a brother who happens to own a boom truck with a 47” crane.

Within not much time at all, Lone Oak Trucking arrived with boom in tow and hoisted the sign from the pavement to its new resting place, lifting it back out a few times so the scouts could ensure it was level.

Troop leader and Mansker’s father Jeff Philbrook said such a spontaneous helping hand is exactly the kind of attitude he has come to expect from the Toledo community, and the sort of kindness Eagle Scouts depend on when completing their projects.

He said part of the point of an Eagle Scout undertaking such a projects is to learn leadership skills and practice altruism, but also to become involved in their community and encounter business and community group leaders and learn how to be of help to them.

Philbrook said he asked Lone Oak Trucking if they needed compensation for the fuel and time it took to assist them, and said he was told they simply wanted to help.

The sign now stands at the entrance to the high school and has been estimated to last at least 35 years. It has also been designed so the vinyl graphics displaying the school’s name and logo, which deteriorate faster, can easily be swapped out and replaced. 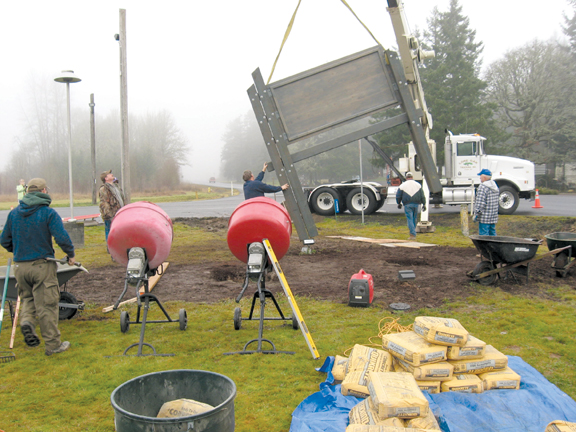 Volunteers and fellow Boy Scouts helped Mansker install the sign Dec. 28, including Lone Oak Trucking (background), a Toledo company who pitched in after initial efforts to hoist the sign were unsuccessful. 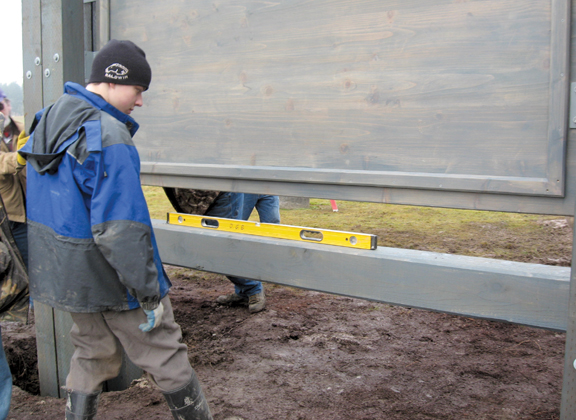 Mansker, currently a Life Scout, checks to see that the sign is level before the foundation is poured for the structure. Volunteers encountered a multitude of tedious tasks during installation, but professed they were invested in getting it right the first time.