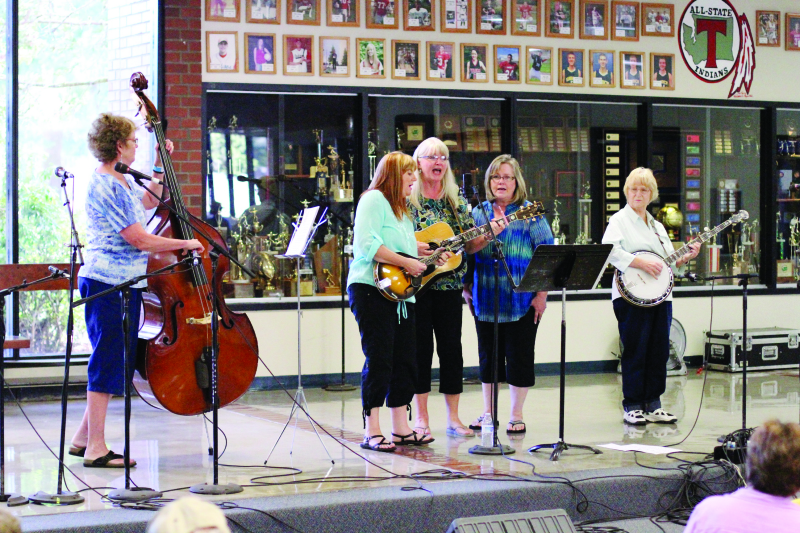 The band "For Him" performs during the Bluegrass Gospel Show held on Sunday. The event brought out several bands and fans of Bluegrass all eager to hear more.

The thirty-first annual Mount St. Helens Bluegrass Festival was held at the Toledo High School this last weekend, which heralded a record attendance despite the cancellations of several performers.

"A lot of people attended and a lot of new people came. People really like Phillip Steinmetz & His Sunny Tennesseans and Tommy Brown & The County Line Grass from Kentucky. A lot of seniors with senior tickets came to the local area," said General Cothren, president of the Washington Bluegrass Association.

The festival consisted of Bluegrass acts performing throughout the weekend, while Bluegrass enthusiasts could eat in the mess hall and camped side-by-side with other bluegrass enthusiasts for the weekend. Friday was Open Microphone night, and they held a "band scramble" on Saturday with a gospel show for Sunday morning. Performers such as John Shubert and the Stray Dogs performed as well as the group Whiskey Deaf. Tommy Brown and the County Line Grass, Terrence Enyeart and Rural Delivery were all bands that could be heard throughout the weekend.

"We had a fantastic mix of music," said Marv Sobolesky, "I really liked Philip Steinmetz and His Sunny Tennesseans, he plays Claw Hammer Old Mountain Music from the Civil War Era."

Philip Steinmetz and His Sunny Tennesseans, who were the headliner of the festival, joined the fray on Saturday. Philip Steinmetz and His Sunny Tennesseans are a Bluegrass band from Waverely, Tennessee. The leader of the band, Steinmetz hails from a family of musicians, learning to play the banjo at age 11 from his Great Uncle Grandpa Jones of Hee Haw and Grand Old Opry fame, two well-known bluegrass bands. Sunday morning a "gospel show" was held during the last breakfast of the festival, where some of the bands from the weekend were asked to stay and participate. General Cothren had some trouble getting some of the performers to stay for the Sunday gospel show, as many of them had traveled far and needed to get a head start home. Despite the trouble, local musician Mary Hart was asked to perform with her band of bluegrass pickin' ladies called "For Him," and performed gospel Bluegrass while things wrapped up for the Bluegrass festival.

For many attending the festival they all spoke with a common theme, that the festival was a great success, one of the largest for attendance in recent history, and that they cannot wait until next year for the return of the next Mount St. Bluegrass Festival.