Big plans, little city: Vader’s Park Board hopes to electrify McMurphy Park by the end of this year 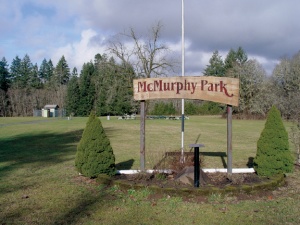 McMurphy Park has been a popular gathering place for community members but is currently without utilities. If Vader Park Board members have their way, public funds and private donations should pay for electricity at the park this year.

Members of the Vader Park Board said installing electricity at McMurphy Park is a real possibility this year, now that financial contributions from the City Hall are available.

$5,000 has been budgeted for the board this year, as opposed to no funding in the recent past, and will become available as property tax payments are made to the city in May and November. Coupled with $3,800 remaining from a $4,000 donation by the Country Cruiser’s Car Club, members said electrifying the park is now a matter of finding time and volunteers.

“We hope that this is the year that it’s done,” said Board Member Jason Dailey during a special meeting Thursday. “Things are kind of coming together with volunteers and finances, so we’re hopeful.”

The special meeting had been held to speak with Lewis County PUD Engineer Pat Obermeier, who has been the board’s contact person throughout ongoing efforts to install utilities at the park. Obermeier said, once an up-front payment for the cost of the project is made to the county, as per policy, he and his workers should have to spend no less than a day installing wires and a 200 amp meter, which he estimated will be ample power for park guests.

“I’ve had longer,” said Obermeier of the six years Vader has been attempting to install utilities at the park. “Some stuff takes a while.”

Aside from acquiring funding for the project, which is estimated to cost $7,100 to PUD and $500 to a contractor, one of the more recent challenges has been a disagreement between Vader and a property owner next to the park, though whose yard PUD will need to lay electrical lines.

Vader had obtained an easement from the property owner with the agreement the city would pay for a water hookup once water lines were extended to the property, but a water moratorium imposed in 2010 has placed that agreement on hold. The owner is currently refusing to allow any city or PUD employees on the property, and Obermeier said the most appropriate solution may be to ask for a declaratory judgment defining the rights of parties involved.

“According to our attorney, in our opinion, Vader has met the requirements for the utility part of the easement,” said Obermeier. “Really, in a nutshell, that judgment is what you really need.”

If a judge finds Vader has upheld their agreement, given they are still willing to hook up water once the moratorium is lifted, public employees would be allowed to lay wires through the easement and provide power to the park. Until that time, Obermier advised Park Board members to lay whatever piping they can afford to on the other side of the easement so total installation time will be reduced.

“When we get power to the park, then we can actually generate some revenue,” said Dailey, stating a well, performance venues and a baseball backstop are ultimate goals for McMurphy Park.

To learn more about regular Park Board meetings and ongoing projects, including the laying of wood chips at Werden Park and maintaining the Historic City Jail, call Park Board Chair Steve Krohn at (360) 880-6281.