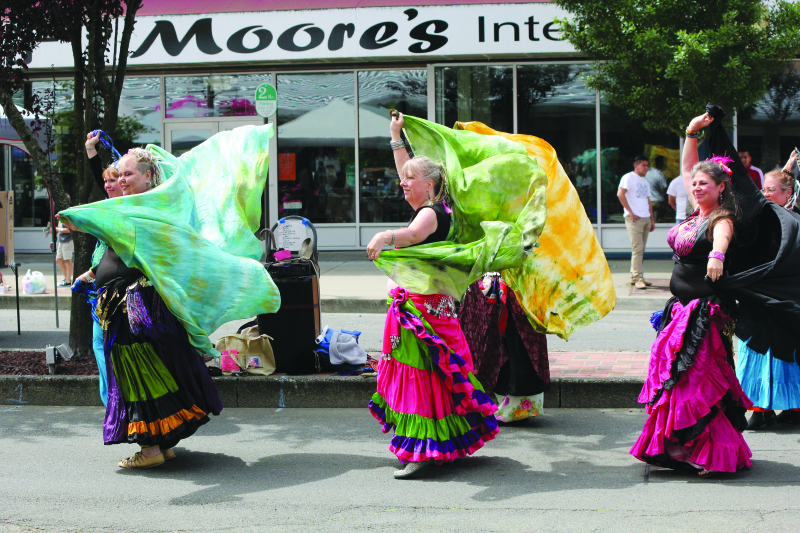 Photo by Scot Pearson - Hip Ahoy Pirate Belly Dancers put on a show of their talents during the Art Walk and Rod Fest held in downtown Aberdeen.

The 17th annual Aberdeen Art Walk and Rod Fest was held on July 24 and 25 with plenty to show the community. Outside of the cars lining the downtown streets of Aberdeen hosted by the Midnight Cruizers, vendors and art of all kinds entertained the community and travelers who happened through the event.

For many the annual event holds a special place as it is a time when artists of all kinds can show off what they have been up to and possibly add a little color and fun to the streets of the downtown area.

As the Cruizers were giving away the awards for Best of Show and Longest Distance Haul-in, families ventured down to see street artists perform from song to dance to fiery flame.

The Hip Ahoy Pirate Belly Dancers put on quite an inspiring show with a variety of splendid color and spirited dance moves. Currently adding dancers and students, the group host lessons at the Gayle Russell Dance Studio for those ladies who are looking for a fun way to stay fit.

Kids took turns donning firemen helmets and stood for pictures for parents with the old-school pump fire truck on display from the Cosmopolis Fire Department.

Artists could be seen adding more art to the alleyways "Artist Avenue" in the downtown, trying to bring a little life back to the darkened thoroughfares.

Commissioned by the Our Aberdeen Artist Community, local Artist Doug Orr is applying his brush to the side of the building.

"I call it Hands and History," said Orr on his scaffold brushing up on his knuckle work.

Part of a larger project, the latest mural in Aberdeen is the second one commissioned this year with "Kelp Forest" by Jenny Fisher completed earlier in the year.
The sub group of Our Aberdeen is looking to bring back a little color to the current murals and future murals of Aberdeen.

Starting with a restoration project to save several murals, the group is also mapping the murals for future tourism and is creating new images all around the community.

For Orr who has done a few murals in California for the city of Long Beach, he wanted to bring a little more then just pictures of history.

"I am using pictures from the Jones Historic Photo Gallery for this mural, but I don't like just pictures of photos," said Orr.

What he has dome is set them in hands as if someone was looking at the photographs which takes you into the picture as if you were the one looking at history through old photos.

"The original concept I had was top place the images in a drop of water, but that was not really working out. I gave it a little more thought and came up with the hand idea and that displays a lot better."

The selected images, seven to start, may turn into more like five or six as the mural is turning out to be a little larger then Orr first envisioned.

"When finished there will be a special listing so people will know what the pictures are, and where in town they can go so get a similar angle of the picture during that time it was taken."

Orr took considerable time in selecting the historical images with a varied selection of business, industry and life of old Aberdeen. The hands depicted holding each photo give the mural a contemporary feel.

As Orr was working his latest addition into the cityscape, other artist like Montesano High School student Michaela Anderson, was down between the buildings in the alley creating new art for the ongoing display of art that is being completed there.

"Its just a form of cubism," said Anderson of her black and white geometrical design.

The alley is becoming more and more crowded as more artist complete work to dress up and place their mark on the community.