Area Teams Set to Hoop It up! 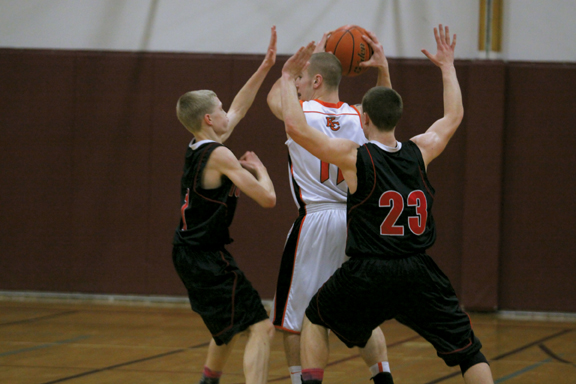 Grant McEwen (right) and Brent Wood (left) return as a defensive and offensive duo for Toledo.

All three area schools sent basketball teams to state in 2013. They saw a state championship, a runner-up to the state champion team and a Cinderella squad that shocked the region with timely victories. Gone are players like Brennon Rakoz, Austin Trafelet, Tierney Uhlenkott and Enrique Hernandez. Other names will have to be written into those shoes if any of this year's hoop squads expect to duplicate any of last year's success.

There are not many surprises with the Toledo boys. Grant McEwen and Brent Wood were huge contributors to a state championship team and will return as juniors this year. The Indians will be a young team and the closest thing to a surprise will be in the form of a tall junior and a senior that is returning to basketball after a year away.

Merly stands 6'7" and has been steadily improving since last season. Senior Creed Askin also returns to basketball after a year off.

On the girls side, there should be a lot of improvement. With only one departure, nearly the entire team returns. Sisters Chaselin and Casee Rice dominated the scoring and will be confident producers in the coming season. Kenzie Harlen returns after a year-long sabbatical with her solid ball handing and will share time with Victoria Tjemsland at the point guard position. Denacia Oberg will contribute on the inside.

There are many that say Enrique Hernandez made the Winlock run through district and into the state tournament. The point guard position at Winlock will be a key hole to fill so the remaining parts will continue success for the Cardinals. Monster rebounder Chance Fisher and All-round scorer, rebounder and ball handler Caleb Rose, now standing 6'3 will be the main contributors close to the basket. Senior Catch and shoot specialist Skylar Tremayne returns from a second shoulder surgery while young sophomore ball handlers Adair Garibay and Jared Pohll will tag team with Redding, California transfer Kyland Heuvel to make the Cardinal engine run.

The Lady Cardinals look to improve as a young team returns with a veteran squad to the floor of the Bird Cage. The great Sydney Bradley promises to contribute from the floor general position while Cecila Stalcup improves in the inside game. Jasmine Lopez adds some sharp shooting while seniors Michlle Gleason, Dustee Alvord and Caroline Garibay promise a lot of hustle and physical play. Underclassmen like Sophia Velasco and Rianna Whitehead promise to contribute to what is now an experienced team.

Gone is Cale Johnson who led the Trico League in scoring a year ago and the team rebounds, assists and field goal percentage.

"Our younger kids are going to have to step forward and fill that void," said head coach Kevin Johnson. "We are a little young both in age and experience and are really undersized collectively."

Ty Johnson will return to start as a guard, while Mason Klingberg, Jesse Althauser and Brock Johnson all have varsity experience.

"I really like this team," continued Johnson. "We have tough kids that will compete. We certainly are not as big, strong, or athletic as the teams at the top (Woodland, La Center, Kalama, Toledo, King's Way) but I like the competitive spirit of this group and expect us to keep improving throughout the season."

In the meantime, the Castle Rock girls will struggle to replace a power packed line-up that went all the way to the state championship. Graduated and gone are Maddi Seidl, Macee Utecht, Tierney Uhlenkott among others and the Lady Rockets will look to rebuild. The CR girls will apply new talent with a new coach to rebuild after last season's 2nd place finish the 1A WIAA State Tournament.

Get out to your local warm dry gym to see the new basketball season tip-off and experience what could historic seasons this winter.