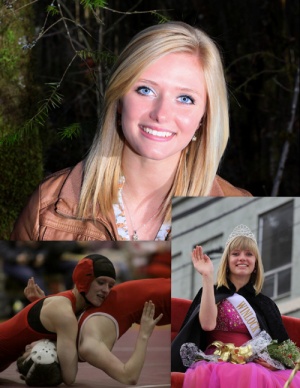 One of the most celebrated student/athletes to graduate from Winlock High School is on her way to Oklahoma City University to compete as a wrestler and enroll in the institution's nursing program.

Rachel Archer was the Washington State Wrestling Champion for three straight years, but there are a long list of other activities on her resume as well. She was active in FBLA, Honor Society, band, and she also participated in 4-H. She made appearances on the Toledo/Winlock Equestrian Team and qualified for state in two events this year. Besides wrestling, she participated in volleyball and soccer through her high school career and was a big sister in the Big Brothers Big Sisters program in the Winlock Schools.

Many locals will remember her as the 2011 Egg Days Queen, but clearly her crowning achievement was being a state champion wrestler, which has led her to Oklahoma City University.

"It is really big in women's wrestling," said Archer. "It also has a really good nursing program there."

She was led to OCU by a wrestling friend from Ridgefield. Archer visited the campus two weeks ago and found it to be a really good fit for her.

In addition to all of her honors, Archer will be named as the Winlock High School's co-valedictorian with classmate Amy Spengler when the 2013 class graduates this June.
Read more from:
TC - Sports
Tags:
None
Share: