All counties heading into drought conditions 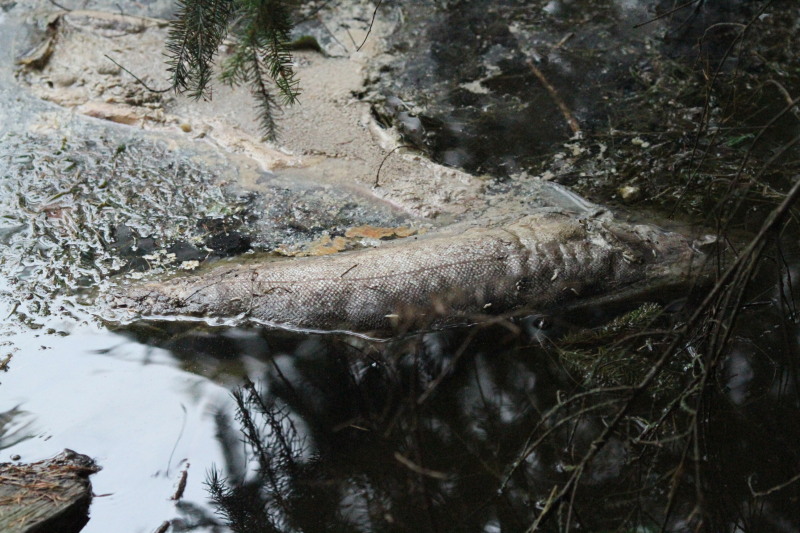 Local ponds are witnessing fish dying from heated temperatures over the past week. Here a trout was lost to a Raymond resident, in total about six large trout were lost.

Over the past few months Governor Jay Inslee has moved the drought needle from a partial drought in May extending the drought for the state in April and now 98.6% of the State of Washington is considered to be in a severe drought.

Washington State Ecology Director Maia Bellon advises that if conditions remain the same, all 39 counties in the state of Washington will qualify for Federal Disaster Relief because of drought conditions.

"The state is considered to be in a severe drought conditions. Conditions worse than we saw in 2001 or 2005," said Bellon, "I have said it before and it remains true today, we have never experienced a drought like this."

Bellon continued to speak on how the state started into this drought with poor snow-pack conditions and the problem has continued to worsen with little to no rain. It has been noted that the state had the driest season since 1895. The Olympic Rainforest is suffering.

Bellon noted that the Paradise Fire in the Olympic National Forest is the largest in our history, and that there seems to be no end in sight. Additional examples are that farmers in Yakima anticipated a downward trend in water estimating one quarter less rainfall, but it has been recorded to be half the normal rainfall so far this year. At least 300 irrigators across western and eastern Washington have been told to shut off their diversions and stop watering crops all together. This is a state first occurrence ever. Dozens of dead and dying Sturgeon (five to seven feet in length), have been found along the Columbia River, attributed to warmer water. Closer to home, Wallace's Pond in Lewis County had an incident of trout found dead based on the rise of temperatures in the water; estimates are over 100 dead fish.

"Our streams are off the charts," said Bellon. "Some tributaries along the Walla Walla Basin have completely dried up for the first time ever."

Reports coming out of Yakima are that anyone who has established water rights from as early as 1885, on certain rivers, are being turned off. But on the upside, Bellon did site that the State of Washington has started accepting grant applications for $16 million of Drought Relief Funding that was recently approved by the legislature. The funds are available over the next two years for water projects that can bring immediate, as well as long-term relief. Projects that will help provide viable water supplies, help the farmers and assist the fish runs. And some projects may be able to get moving in as soon as a few weeks. Water users are working with local agencies to help stave off additional crop loss in areas around the state, as they look at simple and innovative ways to get water to critical areas.

The issue grows even with everything that is currently being done in this time of changing climates. To that point, 19 western states will be gathering in Seattle for a Drought Coordinators Meeting this week.

Hearing from Joe Stohr, Deputy Director Washington State Department of Fish and Wildlife, he highlighted a more specific impact to Washington State.
"We all know that the drought poses a major environmental and economic threat, particular for activities and species that are dependent on water flow."

Stohr gave details as to the financial impact that might be related to the current drought issues.

"In the state recreation related to fish and wildlife management generates $4.5 billion of economic activity annually. This is especially important to rural economies."

The Department of Fish and Wildlife has already started restricting fishing in some areas as of last week. Fishing hours have been reduced or closed altogether to help protect fish that live or migrate in waterways and ponds that are experiencing higher temperatures and low water flow. Restrictions can be found on the Department of Fish and Wildlife website. Steelhead, salmon and trout are particularly susceptible to the current and possible future drought conditions.

"We took steps to protect the most venerable fish."

Deputy Director Stohr also mentioned that the department is already working with the State of Oregon to protect Sturgeon along the Columbia River.

"Staff of the Department of Fish and Wildlife have observed at least 80 dead sturgeon upriver of the Bonneville Dam," said Stohr. He went on to mention that some of the fish sightings include breeding females.

Department of Fish and Wild Life operates 83 fish hatcheries throughout the state of Washington producing 145 million fish every year. Some of those fish were possibly the trout found floating and washed up on the shores of Wallace's Pond in Lewis County. It was noted from local Lewis County Health Department that the pond was stocked for the fishing season and is now experiencing warmer temperatures.

Stohr advised that employees at Washington hatcheries are looking at ways to stave off the warmer water temperatures to continue to raise fish. Some facilities are moving schools of fish to other areas.

Raising the question that has been asked to the Deputy Director Stohr about an all out release of young fish from the hatcheries, he said, "Natural environments right now are more harsh for the young fish."

Recreational impact from the public has also been noted with many people placing up temporary rock dams that restrict the water flow.

This type of activity poses a more dangerous threat than usual. Tribal partners and volunteers have been removing the dams that create wading pools that prevent fish to move freely. Stohr also called upon the public to help identify and dams that they find, take down the smaller ones of you are able or report the activity to have it removed by calling 1-877-933-9847. Stohr cautioned that when removing the rock dams people should not interrupt the natural water flow or harass the fish that may be caught in a pool.

Jaclyn Hancock, a hydrogeologist with the Washington State Department of Agriculture, provided insight of the impacts to Washington Agriculture.

"Some of the impacts that have been noted suggest stunted grain crops and heat damage to cranberries in western Washington. Additionally raspberry and blueberry crop yield is lower and smaller berries have been reported.

Locally in Pacific County, we are seeing u-pick berry farms open earlier in the season with the increased warm weather. But have not witnessed any issues with yield at this point. But irrigation shutdowns have led to lower livestock feed.

In central and eastern Washington, pastures are shorter and drier, compared to normal. Livestock are showing signs of heat stress and orchards and vineyards are recording crop sunburn and reduction in size of fruit.

"Winter and spring wheat yields are expected to be below average this year," said Hancock.

She further noted that 26 counties are now at such levels that they can get some Federal relief from farm services agencies. And that growers should keep detailed records of events that are impacting crops.

"The Washington wildfire season started earlier than anticipated and by June 1, a month earlier then normal, we had reached seasonal tempo for wildfire responses."

Verner reported that 747 wildfires consuming 74,000 acres burned. Fires in grass and brush is consuming many acres. A lack of rainfall keeps the fire danger at a very high level. Especially in the Olympic National Park. Verner also noted that fires have been started by farm equipment this year, which is abnormal.

With conditions remaining very dry and very hot, the department is applying extra strategies to help stave off the onset of additional fires in the state. People are advised to be very cautious when they are outdoors, even to the point of flicking cigarettes out of car windows.

For the Department of Health, Ginny Stern a hydrogeologist, spoke on the water supplies for human consumption.

"For the Department of Health, we are a bit luckier than our constituents," said Stern.

They anticipate seeing impact later in the year when demand is higher and water levels are traditionally lower. But they are seeing some systems showing signs now that are usually observed in August. Of the 14,000 public water systems in the state, some recently had an over-the-top of demand with the July holiday season. And some are starting to take measures to obtain extra water sources in the event of a longer summer season.

Possible mandatory water conservation will come into effect this year. Cities like South Bend recently took the bull by the horns and are working through such measures as to only allow residents to water lawns every other day. The scale of conservation increases as the issues grow to the point of only allowing water use for health and emergency reasons. And the Department of Health anticipates that many municipalities will instigate such measures to get through the season.

Reports out of Raymond are that some rural residents are experiencing low water levels in wells and have been obtaining water from the city because they can not get water out of their wells.

Some cities are already staging public forums to discuss the drought issue. The Department of Health is working on emergency relief funds. Stern also brought out the possibility of a lasting summer stating that people should be vigilant and prepared for a possible three months of August type weather.

John Clemens of the United States Geological Survey Public Affairs and Water Resources Department spoke on the river conditions in the state and how the group has been gauging (monitoring) water systems with over 300 gauges in the state since 1892. The gauges deliver real time data to wa.water.usgs.gov.

"As of the most recent data, 84% of the reporting stations are below normal stream flows, of which 44% or below record flow."said Clemens.

The reports collected are showing the state waterflow is below normal averages. Even compared to other low years, which attribute a 30% increase to the low level of streams and rivers - this is the most we have seen in the states' history.

Nick Bond a Climatologist for the Office of Washington State, tried to provide a forecast of the near and year-end snow pack levels.

"With the heatwave of June through July and the meager snow-pack from the previous winter, it served as a one, two punch for our rivers and streams," said Bond.

He mentioned that through the next couple of weeks we should see cooler weather, but after that, the heat will continue and it looks to be remaining dry.

Coupled with weather systems off the coast, it is a very good possibility that temperatures will remain high and with no sign of rain. If this occurs, and for an extended period of time, it will create a smaller snow-pack going into next year.

But Bond cautioned that it is still a little early to tell what the impact will be in the future.