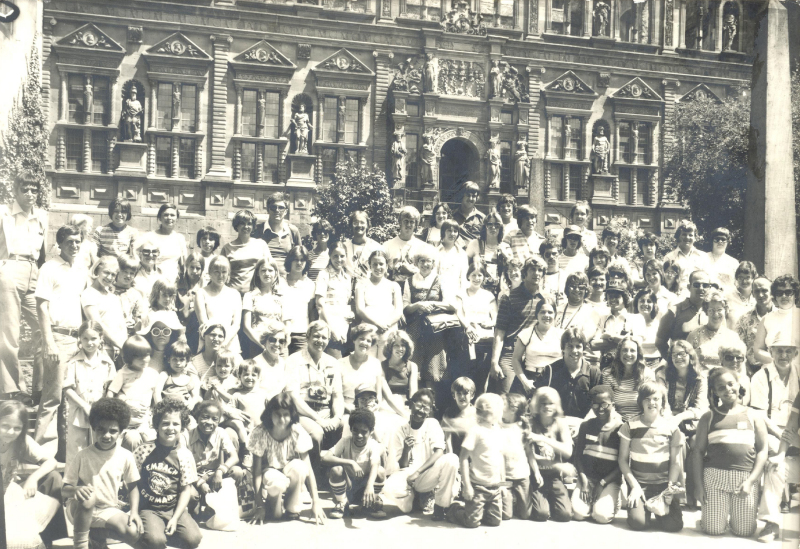 During their trip to Europe in 1976, members stand outside with other visitors after taking a tour of historical buildings in Amsterdam.

When I was 14, I wanted more than anything to go to Switzerland. I was in 4-H and they had sent me a letter about this trip that would take you to eight different countries in Europe and one of them was Switzerland.

I went to my mom and told her I was going to save all my money so when I graduate I can go on this trip. I decided to go between my junior and senior year. The cost was $2,900, plus a plane ticket from Washington to Washington D.C., which was an additional $250. Then I would also need spending money. So I started babysitting every chance I got. I ran for Swiss Miss and put all the money I made from that away. I also went to local clubs and asked for help. They all helped.

Some I had to go back to and give a report on my trip. I saved everything.

I went to Europe in 1976 with 33 other kids from all over the U.S. I did not know any of them until I got to Washington D.C. Our first stop in Europe was Russia, which was almost scary. It was in Russia that I turned 18.

We stood in line in the pouring rain for two hours to see Lenin's tomb. We had to ride by train at night to go from Moscow to Leningrad because we were American and they wouldn't let us see the countryside between the two cities. The buildings there were amazing, and Russia is somewhere I would love to go back to.

From Russia we went to Holland. There, we stayed with local families. Our family had a chicken farm and it was really stinky. From there we traveled on a bus for 19 days, going from country to country. We went to Norway, Germany, Switzerland, Denmark, France and England. We stayed in homes and hotels and even a convent.

It was the experience of a lifetime and it all happened because of 4-H.

I also did lots of things in 4-H. Joyce Craig was my 4-H leader and she taught me so much. I won championship ribbons and got to go to the Puyallup Fair. That was so much fun and such a learning experience.

I feel that 4-H helped mold me into the person I am today. I could never have seen or done all the things I did as a kid if it were not for 4-H.

Read more from:
WHH - Glance at the Past
Tags:
4h
Share: