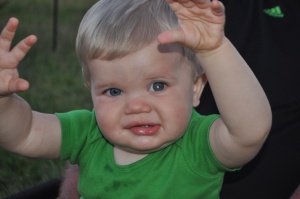 This is a photo taken on Ryder's first birthday, which alerted the family to his eye condition. The glow reflecting in his left eye is a known sign of Retinoblastoma.

On May 31st, Ryder’s father took him into the Pacific Eye Clinic for his normal eye exam. The family was in a specialty center in Portland three days later where doctors at the Casey Eye Institute confirmed that there were tumors in his eye.

On June 4th, after a more thorough examination, 14½-month-old Ryder was diagnosed with Retinoblastoma, which is a cancer that develops within the retina of the eye and is most commonly found in children under five.

On June 27th, his left eye was removed and now he is a happy child and developing normally.

In order to promote awareness for the health of other children, supporters of Team Ryder have set up fundraisers and events.

“Our main focus is just to get the awareness out there for other families,” said Ryder’s mother, Melissa.

Kristina and Sandy Wetterauer have organized a Walk for Ryder at the Raymond High School track starting at noon on July 27th. They will be holding a silent auction and a few raffles with donations from many local businesses.

Debbie Aust and Janice Wetterauer will have a lemonade booth at the Willapa Harbor Festival on August 2-4 in support of Ryder.

Around the South Bend and Raymond area, Amber Kaech and Natalie Hurley have been selling Team Ryder t-shirts, sweatshirts, and bracelets.

Also, Joni Bennett of the Willapa Red & White will be doing a Pampered Chef event with benefits going to the Team Ryder fund. Her goal is $500.

“I’m truly amazed and blown away by all the support and encouragement that w have received from all of the wonderful people in our community,” said Melissa Aust.

Through a program called InfantSEE, participating eye clinics will perform an eye exam on children between 6 and 12 months of age at no cost to the family. Pacific Eye Clinic is a partner in this program. The Aust family encourages parents to have their children checked not only for retinoblastoma but also for any eye conditions.

If you would like to keep up with these and more Team Ryder events, join the Facebook page, TEAM RYDER “Know The Glow”.