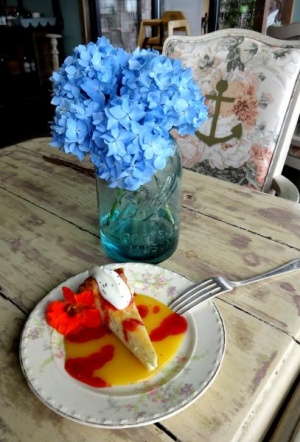 SOUTH BEND - The 101 Public House in South Bend is offering fresh tastes to the Harbor, thanks to new chef McKenzie Johnson who completed her chef’s training at Le Cordon Bleu in Seattle.

Originally from Montana, Johnson worked as a hairstylist for six years before leaving on a life changing trip to Namibia, Africa to work with orphaned children. “It was very rustic living, village life,” Johnson said. “I kind of got back in touch with food, in general. A lot of the things we ate were from the fields, and I worked in the fields, and so I kind of got a new perspective on food and on life. I wanted to do a career change.”

Upon return to the U.S. after four months in Africa, Johnson enrolled in Le Cordon Bleu for a year-long program on cooking and baking. “It started out with the fundamentals, like how to hold a knife and how to cut an onion. Then the classroom aspect turned into, at the end, how you would run a restaurant. . . We started at 6:00 AM and we would prepare different things in different groups all day, and sit down at the table and all eat and critique. On the other side of things, we got tested on restaurant management, different baking techniques, and food science in general,” Johnson explained.

She decided to go back to Namibia for eight months after completing her studies at Le Cordon Bleu. “After learning everything classically, learning all the techniques, and working with a lot of food and resources, and then going back to basically cooking over a fire for eight months – it kind of stripped down the process. Which is fun for me, I prefer cooking with limited resources rather than with just anything you can get your hands on.”

“After that I decided that before I wanted to get involve with a restaurant, I wanted to get a better look at how food is grown. I decided to buy a little trailer and go back home to Montana and live on a little organic vegetable farm,” Johnson continued.

She worked on the farm for one season, or six months. “When I was in Namibia, I realized how important it is for someone to have the simple knowledge of being able to grow a carrot, or a potato. We get really comfortable in society nowadays and get lazy on the basics – I wanted to bring myself back to the basics of learning how to do those things so that one day, if I have to, I can do that for myself,” she explained.

“Anytime I can bring a little bit of nature to the plate or something that isn’t found in your local grocery store, it makes people think twice of what’s around them. Right now I’m waiting for wild blackberries and chanterelle mushrooms to pop up. We have an oyster mushroom penne on the menu right now and those are local. I got to be in the process first hand of seeing where they grow and how to pick them. Now for the rest of my life, I know what they look like, I know if I’m hungry for an oyster mushroom, I know where to get it, how to cook it and enjoy it,” Johnson continued.

She got her restaurant experience at La Boucherie on Vashon Island. La Boucherie, “the butcher shop” in French, is a butcher shop, farm, and restaurant all in one. There, she formed dishes with fresh and custom meat products and fresh farm ingredients. “I learned all my best techniques from that place because we had the best ingredients. That’s where I really learned that ingredients are important.”

“I really enjoyed the full aspect of the menu [at La Boucherie], but one of the things I enjoyed was learning how to make pasta – I made all the pasta for the restaurant. That’s why we tried to have a homemade pasta dish on the menu here,” Johnson said.

At the 101 Public House, Johnson explained that she is in the process of finalizing a new menu. “I want the menu to change with the seasons and with what’s available here, locally. The vision is to grow modestly right now. We definitely want to grow, we want people to come and try the food and see what we’re doing and hopefully appreciate it.”

“We’re slowly starting to build up our menu with more local items and quality items. We’re focusing on our lunch right now because tourist season is around the corner,” she continued. “For us, we want to provide guests with stuff that is comfortable and they’ll enjoy, but at the same time we want to surprise them with the extra touch or something maybe they’ve never had before, like the Spaghetti Bolognese with a fried farm egg on top – just doing different techniques that make people go, ‘Oh, I never had it that way before, but it’s really delicious.’”

One of the unique items that Johnson has added to the menu is spring rolls: “They showcase the local greens and bring in a new flavor. We have a peanut sauce with them and top it with it sriracha and coconut milk and we’re using raw albacore tuna in them. It’s great for people who are wanting something light and not just a salad.”

Despite the revisions, the primary focus of the menu will be oysters. “It’s exciting to be right here on the water and in the oyster capital of the world,” Johnson said. “It’s a unique opportunity, so oysters will always be showcased, but we’ll definitely have a well-rounded menu as well, as far as other types of seafood and we’ll also have beef, chicken, and pork options.”