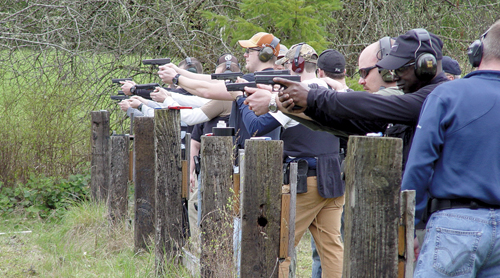 Cadets with the 2013 Police Reserve Academy spent Saturday and Sunday at the Cowlitz Gun Club, in Winlock, practicing the fundamentals of safe and effective marksmanship.

Part of their ongoing curriculum, cadets were made to practice maneuvers such as clearing a misfire, speed reloading, and quick draws, all of which have a strong bearing on their effectiveness as future members of law enforcement.

Range leader and Morton Chief of Police Dan Mortensen said the most valuable shooting skills a cadet can practice are trigger control and sight alignment, stating a marksman who is "surprised" when the gun goes off will deliver an accurate shot, as their hand will not be moving to compensate for the impending kickback before the round leaves the barrel.

To illustrate how small movements during trigger depression can affect a bullet’s path, cadets paired up with one aiming the gun and the other depressing the trigger. Cadets saw an immediate improvement when their only focus was keeping their fore sight on the target, learning they need to be attentive to how their hand is moving when firing the weapon.

Safe range etiquette was also a priority, as some shooters absently pointed their weapons toward themselves or others while changing a magazine or holstering their gun, an action called "lasering" on the range. Mortensen said being conscious of and correcting such habits was paramount to prevent injury or death in the event of an accidental discharge, stating cadets should never point their weapon at anything they do not want to destroy.

But not everything was curriculum and gun safety, as cadets spent time providing colorful commentary while their two main groups alternated between range use. Academy Commander and Winlock Police Chief Terry Williams has said building comradery between cadets is as important as the curriculum itself, because such relationships can keep officers from succumbing to the demands of their job.

If cadets continue at their current pace, they will have no problem graduating in June, though they still have to survive an emergency vehicle operations course and "Hell Day," featuring tazers and pepper spray. Keep reading hometowndebate.com for the latest academy updates. 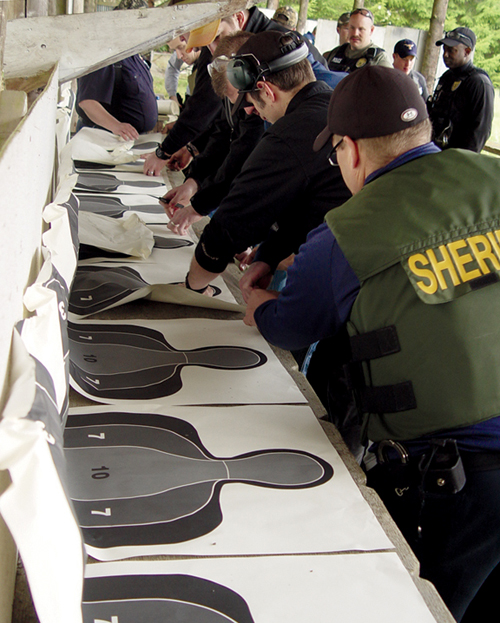 Cadets prepare targets to hang from PVC frames downrange during firearms practice Saturday and Sunday for the 2013 Police Reserve Academy in Winlock. 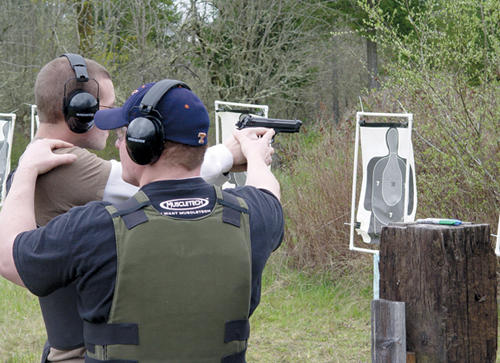 Oliver Einarsson (left), of the Winlock Police Department, and Andrew Hansen (right), of the Lewis County Sheriff’s Office, participate in a trigger control exercise. One cadet took aim while the other depressed the trigger, to show how accurate a gun can be when aim remains the focus. 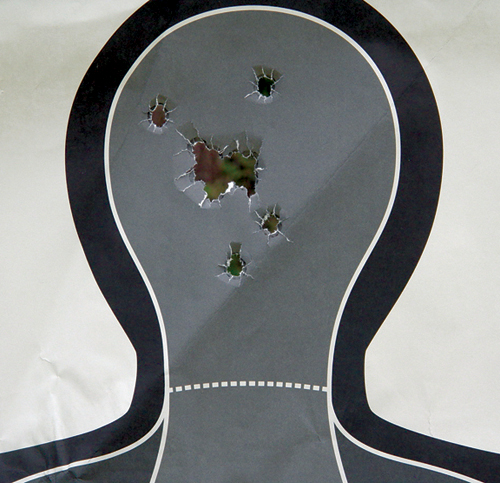 A tight grouping of shots by Mike Boone, of the Tenino Police Department, who later proved to be the highest-scoring marksman during qualification tests, scoring 485 out of 500 points. A firearms instructor by trade, Boone said he was attending the academy to keep his skills honed. 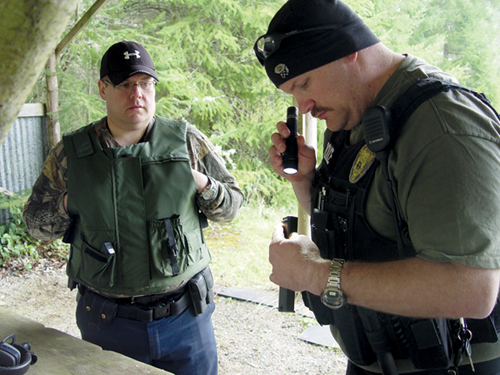 Boone (right) inspects a Glock 40 owned by Johnathan Meyer (left), of the Lewis County Prosecutor’s Office, after the weapon failed to fire. It was later determined the ammunition, not the gun, was faulty, for which Meyer said he was very grateful.