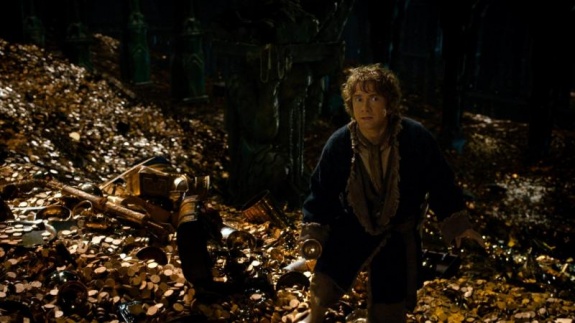 Bilbo Baggins (Martin Freeman) makes his much-anticipated entry into the Lonely Mountain in The Hobbit: An Unexpected Journey, now in theaters.

A smarter, faster-paced flick than its predecessor, The Desolation of Smaug works well because of its faithful use of the source material, as well as the strength of new characters and plot lines meant to fill out the movie.

In this installment, Bilbo Baggins (Martin Freeman) and his Dwarven comrades, led by Thoron Oakenshield (Richard Armitage), must pick up their pace if they are to reach The Lonely Mountain by Durin's Day, the only time of the year they can access the magical door leading secretly into the mountain. Their goal is still to reclaim the mountain from the dragon Smaug (Benedict Cumberbatch) and establish once again their scattered Dwarven kingdom.

To reach their destination on time, they must travel through Mirkwood, an expanse of haunted forest once quite green until a necromancer appeared at a the nearby fortress of Dol Guldur and began sending his minions out to occupy the woods.

The role of the necromancer, also portrayed by Cumberbatch, is a character that stays pretty well in line with the book, and it was a delight to see him incorporated into the movie due to his small, yet not so small, role in the story. This villain was left vague-enough in the original text to survive a fair amount of creative interpretation on the part of Director Peter Jackson, and was rendered quite menacing and formidable in the film.

While surviving the horrors of Mirkwood, Bilbo and Thorin’s party continue to be pursued by goblins and are in no better shape when the end up in the hands of less-than-hospitable elves. Their fortunes change when they encounter the men of Esgaroth, a lake town located at the base of The Lonely Mountain, but greed shows itself as the fatal flaw of both the townspeople and Thorin as the showdown with Smaug approaches.

Smaug does manage to remain alive by the end of the movie, and will be the subject of great conflict, no doubt, when the third film, The Hobbit: There and Back Again, comes out next year. But his appearance in this film both makes up for his failure to show himself in the last movie, and hits the spot when fans of the book go looking for a faithful representation of the last of the great dragons.

Cumberbatch will undoubtedly get most of the credit for this villain's success as a character, but Smaug is also written and animated quite well and was a joy to watch as he strutted and stalked across the screen.

The finale of the film was a pretty far cry from the books, and I'm very glad the writers were not so daring as to entirely change the plot around, though I was afraid for a while it had crossed their minds. While the end was a bit of a contrivance that almost betrayed the cleverness of the plot points preceding it, it did serve to provide some tense action scenes and certainly did not send people storming out of the theater.

What did work brilliantly, and probably contributed most to the quality of the film, were the Elves introduced in Mirkwood. King Thranduil was played expertly by Lee Pace, an actor used to portraying icy, distant characters; while Orlando Bloom returned as Legolas, though a little darker and grittier than when last we saw him in Lord of the Rings.

New to the film was the character of Tauriel (Evangeline Lilly), the captain of the Elvish guards, who ends up enamored with one of the dwarves. This unconventional romance is portrayed as far from cheesy or over-simplified, and ends up serving to move the plot forward when it may not have otherwise.

Overall, I would give The Desolation of Smaug a score of 8/10, marking it as a well-paced fantasy thriller that sets a solid standard for There and Back Again to live up to. Of course, I'm probably pretty biased, because the journey though Mirkwood was my favorite part of the book.

But the next film should be quite a doozy when a number of long-building showdowns conclude, and I imagine waiting a whole year is a small price to pay to see how Jackson and his team of writers pull it off.